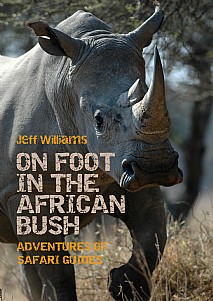 Safari guide Jeff Williams has brought together a treasure-trove of stories of dramatic events that occurred whilst guides were leading parties through the bush on foot. Often these were recounted during evenings sitting around a campfire with friends and guide colleagues, swapping yarns and sharing their experiences. Frequently guests were there listening enthralled, shocked and amused in equal measure and sometimes the telling of the tale evoked vivid images.

A walking trail in the bush is the ultimate adventure for a visitor to wild Africa and it is the skill and experience of their guides that allow them to do this safely. These walks highlight the essence of the bush – the sights, sounds, and scents that still embody the Africa of the past. Nevertheless, there are occasions when, in spite of the guide’s best efforts, unplanned confrontations with potentially dangerous animals occur. Usually these end comfortably with only an adrenaline rush for guests to carry home or publish on social media. But occasionally things become much more dramatic.

The reader will hear of potentially perilous situations involving encounters with charging lions, angry elephants, cantankerous buffalos, curious rhinos and, worst of all, the animals’ and humans’ greatest enemy, poachers. There is the bushman guide who walked over 20km through the night with an inexperienced young girl, successfully handling an attack by a hyena, avoiding elephants and finding shelter and sustenance. Another very young guide used a hugely unorthodox and personally dangerous technique to rescue a guest literally from the jaws of death. Talking to a large elephant to dissuade him from harming a walking party? Yes, that’s here too.

Sadly, the real African bush is shrinking in size and is under serious threat from the increasingly populated and developing modern world. Some may be able to visit these precious remnants in person but this book provides a window into the specialized field of walking safaris for the armchair reader, the seasoned world traveller and even a stimulating reminder for those who have done it before. Whether you are an armchair explorer or an old Africa Hand there is drama, excitement and even laughter: they are all here.

This will be of huge appeal to anyone who enjoys an enthralling read and all those with an interest in wildlife, the natural world and with a special interest in Africa.