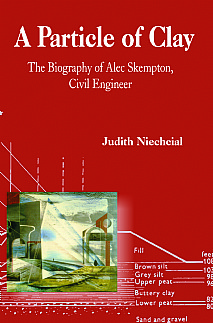 A Particle of Clay

One of the most eminent engineers of the 20th century, both on the national and international stage, Professor Sir Alec Skempton was truly an influential figure in the discipline of soil mechanics. In the late 1940s he was instrumental in developing the subject, and formed the first university department of soil mechanics at Imperial College, London. Over the years the research, papers and books flowed, as did the accolades and recognition. But this is not a book about soil mechanics alone - it relates much more, about the man and how he really viewed life, how he approached challenges and how he would be content only with a job well done. It conveys his diverse interests in music, history and so much more.

Written by his daughter, the book illustrates Skem's contribution to engineering knowledge, what influences formed him, and how his ideas developed. It reveals the private man behind the public image and in so doing it also sets in context a dynamic age in engineering.

This fascinating book will be of especial interest to professionals and students in geotechnical engineering, engineering geology and indeed anyone with an interest in their history.

'It is special, not only because it is about a very great engineer, but also because it is written by his daughter, Judith Niechcial, who is uniquely placed to write about the whole man...She very skilfully weaves into her narrative his many great achievements and accolades placed in the context of his family life and background ... No review can do this book justice - it is a must for anyone who attended Imperial College, who is an engineer or who has an interest in the history of engineering and the early engineers'. Imperial College Engineer

'...The book gives a detailed account of much of Skem's professional work, and in doing so provides an excellent history, not only of the man himself, but also of the emergence and development of soil mechanics in the UK and internationally'. Geotechnical & Geological Engineering

'This book ... is an appropriate memorial to a great man. I am personally grateful to Judith Niechcial for having assembled the story of the life and achievements of her father which is stimulating and a most worthwhile read'. The Structural Engineer