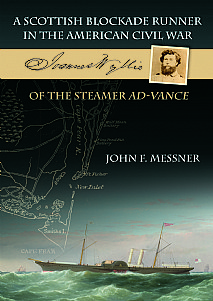 Joannes Wyllie of the steamer Ad-Vance

Extract from Foreword by Dr. Stephen R. Wise, author of Lifeline of the Confederacy

John Messner has done a fine and commendable job in bringing to life the varied and fascinating career of Joannes Wyllie.  Messner’s comprehensive account will stand as an example of excellent research blended into a well-crafted narrative that brings to Civil War historiography an important book.

Born in 1828 near Kelso in the Scottish Borders, Wyllie went to sea as an apprentice seaman in 1852 and quickly rose through the ranks.  By 1862 he had gained his masters certificate in Liverpool, and there he took command of his first vessel, the Bonita. He sailed for Nassau, then a booming port involved in running contraband through the Union blockade of the Confederate States, at that time fighting in the American Civil War. Sailors from Britain rushed to man these vessels as great fortunes could be made if a successful run was made into a Confederate port.

On the return journey, two agents of the State of North Carolina, Thomas Crossan and John White, were travelling to Britain on the orders of Governor Zebulon Vance to purchase ships to run the blockade. This set Wyllie’s career as a blockade runner on course.  White and Crossan arranged the purchase of the Clyde-built paddle steamer Lord Clyde and, just five months after docking in Liverpool as commander of the Bonita, Wyllie took command of the Lord Clyde, renamed the Ad-Vance. He was aboard from the start of the vessel’s new career until her capture in September 1864.

Two more commands of blockade runners followed; he was captured again and then evaded the American authorities through an ingenious, and at sometimes unbelievable, escape to Scotland.  After the war Wyllie continued at sea for another two years before returning to Scotland to settle as a farmer. The role that Wyllie played during the Civil War is explored in depth and reveals that he was a constant face, and force, in the crew of the steamer with his actions and abilities being greatly appreciated by both crew and owners alike.

The most comprehensive history of the Ad-Vance is provided, from the day she left Glasgow until her capture off the Carolina coast. Many fascinating contemporary passenger diaries, personal recollections from crew, letters and telegrams between Wyllie and Governor Vance, official records of the war and newspaper reports are included.

This will be of immense interest to followers of military history, especially of the American Civil War, but also those who enjoy naval and maritime history.

'...is a book that shows just how good a modern biography can be... he lived a long and exciting and absolutely fascinating life and author John F. Messner can be congratulated in bringing Wyllie to the page in a way that is beautifully and compellingly written... illuminates an intruiging corner of the story of the Amercian Civil War... an extremely impressive book... We'd highly recommend this book to anyone with an interest in nautical history and Scotland's place within it'. Undiscovered Scotland

'...is a wonderful insight into a fascinating life, with a potted history of Wyllie's time onboard Ad-Vance and also featuring a collection of passenger diaries, memories from crew members, official war records and telegrams between the commander and officials on dry land. A truly inspiring read'. Our Man on the Ground Travel and Lifestyle

'This is a  fascinating, well researched account of Wyllie's life at sea, recreating the excitement and greed that accompanied the blockade runners'. historyofwar.org

'...features tales of maritime adventure from voyages across the globe, first-hand accounts of Wyllie's time on the Ad-Vance, and the most comprehensive history of the Ad-Vance ever to be published'. The Saint Andrew's Society of San Francisco

Between Daylight and Hell
Iain Lundy