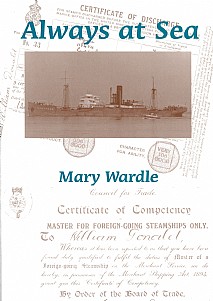 Written from her father's diaries, Always at Sea recounts the exploits of William Donald who went to sea as a boy in 1912 and stayed in the Merchant Navy for almost fifty years! Over the years he proved himself a very able and entirely reliable mariner - in fact he made an outstanding master. In the course of his career he dealt with most incidents with aplomb: eccentric captains and crews, a pile-up in Cardiff docks, a crazy baboon and a submarine chase and subsequent grounding. All are described with a keen sense of observation and humour.

The years between the wars were full of incidents including a cargo of bones containing human remains, a collapsing pier, a steadily expanding fireman and the sinking of a tanker, while the Second World War brought endless convoys, gun watches and sleepless nights.

It really becomes apparent that Donald, and other seamen like him, were owed much by their employers, the shipping lines, for their professionalism and dedication. There is much of interest for anyone who likes the sea or just wants an entertaining read.

'... an absorbing account apparently in his own words, which flows well and is well written. ...Insights into the master's business role are especially vivid for voyages to Soviet Black Sea ports... This is certainly one of the better autobiographies, and may be recommended for the understanding it provides of life as a merchant navy deck officer and master and for its readability'. International Journal of Maritime History

'This account of William Donald's career at sea from 1912 to 1962 is full of good things. ... an entertaining narrative of the period. It particularly should awaken memories for mariners - and in many cases intrigue them - who served in the Merchant Service... An intriguing insight into the many trials and tribulations of a tramp ship master ...'. The Nautical Magazine

'... a book which is both a valuable record of life at sea in the first half of the twentieth century and an entertaining read in itself.' Australian Sea Heritage

“...many thanks for getting this to me so quickly. ”
Carole, UK
“Thanks for the extra care in packaging. It arrived in perfect condition. ”
Belinda, USA
“Thanks for your excellent service. ”
Paul, New Zealand
Dunbeath, Caithness, Scotland KW6 6EG, UK T: +44(0)1593 731 333 E: info@whittlespublishing.com