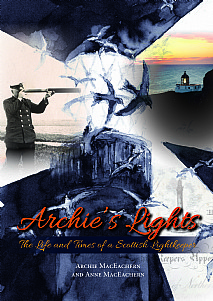 The life and Times of a Scottish Lightkeeper

Extract from Foreword by Hector MacKenzie, Lord MacKenzie of Culkein
...Like so many other lighthouse families, Archie’s family and mine have a rich lighthouse tradition going back generations. ... Archie MacEachern’s illustrious career with the Northern Lighthouse Board (NLB) begins as a boy seaman in 1926. ...this book is so important. Its stories are a remarkable and significant addition to lighthouse service history and importantly, to the social history of Scotland and the Isle of Man. ... I am sure that all those who have an interest in lighthouses, their history and the lives of keepers will enjoy Archie’s Lights as much as I have.

Born at a clifftop lighthouse in 1910, Archie’s life was spent in the world of Scottish lighthouses – he was one of the third generation of his family in the service of the Northern Lighthouse Board.

Archie’s stories have gripped listeners of all ages and have now been compiled by Anne MacEachern. Written in Archie’s words, this account portrays the man and reveals a past way of life. From peacetime through war, dealing with goats, shipwrecked sailors or German spies, the story brings vividly to life the challenges of living and working at a lighthouse, including raising a young family at such an isolated and potentially dangerous place.

Many characters appear at various lights, each with their own personality and often annoying habits. Short-term transfers took place in and just after World War 2 when communications and transport were particularly difficult. There were hardships and rewards, and a mystery to solve: the well-known disappearance of three keepers at the Flannan Isles in 1900.

The men had to be – and were – remarkably resourceful and courageous, although not all could stand the isolation and dangers at offshore pillar rock lights, especially in wartime. The sea ruled their lives – creating idyllic periods on sunny, calm days but being uncontrollably destructive for much of the time.

Like his colleagues, Archie upheld to the best of his ability the ideal of their Service, ‘For the Safety of All’, but in his younger days he was not afraid to speak up and press, with others, for better conditions. His service as a full-time keeper continued in part-time capacities, extended over a period of 67 years.

Through this man’s keen eye, the reader will meet people, birds, animals and situations from a lifetime of service; a revealing glimpse into this close-knit world. There is also humour, often that dry Highland humour, which adds spice to the telling; in Archie’s case a fondness for wild places and dried figs helped.

This book will be a must for all lighthouse enthusiasts and anyone with an interest in recent maritime history, biographies and who enjoys a good read.

‘Anne’s faithful recounting of her husband’s career shows the importance of oral histories and is a shining example of how to preserve ancestral knowledge and records of maritime service’. Nautilus International

‘A work of enduring love and humanity… and so much more. …Archie’s Lights is a balm in its comforting cadences and its reassuring tones, which hark back to a world of unshakeable values and quietly understated wisdom. …Anne MacEachern has brought forward a masterpiece. …she has woven a spell that transports the reader into another world; a world of harsh and inhospitable places like Dubh Artach and Skerryvore…’ Scottish Review

‘Not only is the daily routine of a keeper brought vividly to life but so are the remote communities that generously welcomed Lighthouse families into their midsts. The book is littered with fascinating anecdotes and details that are unlikely to be recorded elsewhere. We owe much to Archie’s wife Anne for sharing this important story’. NLB Journal

‘Jam-packed with stories of adventure and adversity, and well-illustrated with colourful details, photographs, paintings and most importantly, memories of a way of life now gone, Archie’s Lights is an excellent addition to Whittles’ line of top-notch books covering aspects of lighthouses and lightkeeping’. The Lightkeeper

‘The story brings vividly to life the challenges of living and working at a lighthouse, including raising a young family in isolated and potentially dangerous places. I am sure that all those who have an interest in lighthouses, their history and the lives of keepers will enjoy Archie's Lights as much as I have’. The Northern Scot

‘…this is undoubtedly one of the best books I have read in years! There is so much material to enjoy both anecdotal and factual… …this book is crammed full of detail and excitement. Surely a worthy addition to the swelling bibliography of today’s lighthouse world. This book stands in top place for me, and I give it full marks!’ Bellrock.org.uk

‘Over the years, Archie’s stories have gripped listeners of all ages and have now been beautifully compiled by Anne MacEachern in this wonderful book. Highly recommended’. Sea Breezes

‘…this book takes one on a rich journey through the twentieth century as a lightkeeper. …a compelling biography. …offers a fascinating insight into the distinct way of life which no longer exists. Through Archie’s memories, Anne has opened up a wealth of detail relating to the history of lighthouses, their keepers and the communities they served in twentieth-century Scotland’. LAMP

‘…a wonderful book for anyone with the slightest interest in lighthouses, and especially in Scottish lighthouses. …succeeds in bringing the lighthouses to life in a way we’ve never quite seen before, by focusing on the story of one remarkable man. It also succeeds in bringing vividly to life a man who was an integral part of that long-gone world…’ Undiscovered Scotland

‘…gives a personal insight into the challenges he faced, both professionally and personally’.  The Scots Magazine