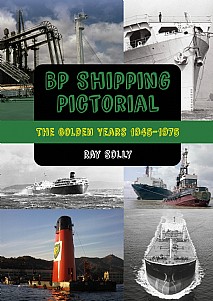 • Profusely illustrated with images of ships and ship plans

This is an in-depth appraisal of the 30-year post Second World War period that covered significant changes in the history of British Petroleum Shipping. These major changes were vital to the development of the company’s fleet from modest 12,000 summer deadweight tonnage vessels to the Very Large Crude Oil (VLCC) class ships which ranged up to British Respect with her capacity of 277,746 sdwt.

The author starts with a concise history of BP from its beginnings around 1915, including early developments in the design and construction of tankers. Losses during the Second World War were countered by developments in conversion of vessels for wartime duty and the ongoing construction of new vessels. Post-war, and after considerable losses, the drive to repair vessels and build new tankers was paramount and led to the growth of the 1950s.

In many areas, BP was instrumental in designing and implementing safety rules long before they became international law and the effects of these changes are considered in detail. Also featured is the recovery of the fleet following the ravages of the Second World War which was influenced by an unprecedented international demand for oil. There were also numerous political upheavals that had a direct influence on ship routeing and fluctuations in the growth of the parent company, BP International, which affected the shipping arm, BPTC.

This was a period of serious oil pollution that caused worldwide consternation. This concern led to the formation of the International Maritime Consultative Organisation (IMCO) which was ratified in 1948 and renamed the IMO in 1982. This organisation became a major innovator of a raft of consultative documents which eventually led to numerous protocols and conventions, leading the marine transport industry and the tanker industry in particular to becoming the most widely-regulated form of transport in the world.  This brief was extended to encompass professional certification across all ranks of seafarers, helping to correct numerous problems which affected crews during this 30-year period. Tank construction and ship stability problems are discussed along with a major overhaul of the International Regulations for Preventing Collisions at Sea. Other issues confronted during this period include preliminary work which would later be extended to include ballast water transference worldwide and air pollution, etc.

This will be of major interest to everyone with an interest in ships and shipping, international maritime history and the merchant marine, and specifically BP.

In the Treacle Mine
J W Richardson