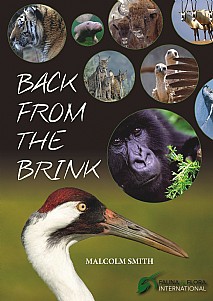 Back from the Brink

'...Malcolm Smith has provided us with a fascinating insight into the numerous threats faced by some of our most vulnerable wildlife and the resourcefulness of those who dedicate their lives to protecting it. These are uplifting tales of hurdles overcome, crises averted and disasters prevented.' Extract from Foreword by Mark Rose, Chief Executive Officer, Fauna & Flora International

Back from the Brink is an antidote to a world that seems full of stories of wildlife doom and gloom. Amongst all the loss of habitat and the animals and plants that are in spiralling decline, it’s easy to forget that there are a huge number of positive stories too; animals threatened with extinction, such as the gigantic European Bison –  extinct in the wild – having their fortunes reversed and their futures secured.

This is the story of some of these successes. How the Humpback Whale, in seemingly terminal decline because of commercial whaling, is today recovering naturally, getting back to the numbers that swam in our oceans before they were viciously harpooned. Others have needed considerable help such as the enigmatic Arabian Oryx, the origin of the unicorn myth, that was reintroduced to the fabled Empty Quarter deserts of Arabia where over a thousand again roam.

These are stories of enormous personal courage, dedication and patience by those protecting animals like the Black Rhino; of reinstating damaged or destroyed habitats for predators such as the enchanting Iberian Lynx; and of reintroducing birds such as America’s tallest, the Whooping Crane, to places where they once thrived but had long gone. Back from the Brink recounts the struggle to win the support of local communities to accept and bolster the populations of some of our largest animals such as the Mountain Gorilla – one of our closest relatives – and the magnificent Siberian Tiger, both of which once seemed destined for extinction.

The re-introduction of the Wild Turkey, extirpated from most American states by early white settlers, was successful because of biologists’ ability to learn from early mistakes. The gorgeous Large Blue butterfly – extinct in England by the 1970s – would not be thriving today without the incredible investigation that unravelled its complex living requirements, a lesson in detection that would have challenged Scotland Yard’s finest. And others, like the gentle, lumbering Florida Manatee, its numbers recovering very slowly in part due to enormous public support. It’s the kind of care and consideration that Man needs to share to make our planet a richer place for us all.

This will be of immense appeal to everyone with an interest in nature, wildlife and conservation and who enjoys a good read.

‘An antidote to wildlife doom and gloom, this book shows that it’s possible to turn the tide of species decline. It’s full of conservation success stories, valuable lessons and inspiration for the future’. Wildlife World

‘…the wide-ranging approach of Back from the Brink gathers stories of personal courage, conservation efforts, special challenges, and world encounters in the effort to bring back animals from places where they had once thrived. …a solid pick for any science and nature collection.’ California Bookwatch

‘…packed with information… an excellent and informative read’. BTO News

‘…it’s wonderful to hear any tales of animals that have been saved, and of the fantastic individuals who go to great lengths to help them’. The Weekly News

‘The knowledge, experience and raw passion for conservation that Dr Smith possesses is exuded in ‘bucket loads’ in this book coupled with factual up to date information on the plight of some of the world’s most endangered species. …a supremely interesting read…’ ECOS

‘Anyone with the remotest interest in conservation should read this book now. …weaves some wonderful stories into this statement of hope. … Buy it. In doing so you will contribute to that spirit.’ SWARA

'...a fascinating book covering a range of animals world-wide whose declines have been halted and reversed. I would thoroughly recommend this book to anyone with an interest in animals at risk on this planet'. Alan Stewart, Wildlife Detective

'...a good read filled with interesting facts and stories. ...a worthwhile addition to the library'. Shooting and Conservation

'...high level of detail in very readable prose, together with a wealth of excellent full colour illustrations and a useful locations map. ...will be read from end to end by anyone with an interest in the survival and conservation of the magnificent fauna of our fecund planet'. John O' Groat Journal