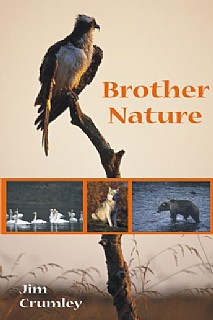 Acclaimed nature writer Jim Crumley turns his poet's instinct, his naturalist's eye, and occasionally his camera on his core territory in Highland Perthshire to produce a book of rare intimacy.

Brother Nature is based on thirty years of exploring and thinking about the country on his doorstep. He also applies to that country lessons learned at first hand in other lands, notably on a life-changing trip to Alaska.

The book is in two parts. The first, The Brotherhood, is a series of vivid and intensely personal encounters with grizzly bears, badgers, deer, otters, orchids, ospreys, red kites, golden eagles, ravens, and his beloved swans.

The second part, The Long Way Back, considers how his native Scotland might achieve a closer, more thoughtful relationship with nature. In a powerful conclusion, Jim Crumley makes the case for the reintroduction of wolves as a catalyst in the process of achieving that relationship.

He writes: 'Again and again, walking these wolfless mountains, I feel their absence, or rather I feel the distant, elusive nature of their old presence, for no landscape that has sustained wolves ever loses completely the imprint of their reign.
'When I go alone among wild places, I feel as if I am trying to repair an old and broken connection, a bridge between landscapes. We broke it when we exterminated the wolf. That was the watershed.'

Part I: The Brotherhood. The Bear on the Shore; The Badger on the Shore; Nature's Sacred Hour; Hail and Farewell; Soliloquy by an Empty Reed Bed; The Tainted Miracle; The Kite's Tale; The Hill of the Ravens; Wind's Work; Orchid Time; Thoreau's Ghost; The Very Edge of Magic
Part II: The Long Way Back. Towards a Native Forest; Conservation and Cures; Old Simplicities; 2015 - a Land Odyssey

This beautifully written and thought-provoking book is sure to be of immense interest to Jim Crumley's wide sphere of readers, all those interested in nature writing, wild places and the natural world.

'Let me tell you from the start: this is a wonderful book. The title suggests the background: we are in a deep ecology frame - Saint Francis with First Nation wisdom of the wild. We start with an encounter with a bear in Alaska and the way that Jim Crumley's guide, a seasoned bear watcher, deals with the encounter. ...The writing...is very attractive and each chapter has its delights. It carries the messages that Jim Crumley wishes to convey with skill and passion. ... I liked the description of the late Don MacCaskill's dream that beavers might return to the Lochan Buidhe to the north of Loch Lubnaig.' John Muir Trust Journal

'... an intensely personal and passionate study of man's relationship with the nature that surrounds him... The moment where he claims to feel some sort of connection with that bear is a magical one... People's need to make the effort to connect with nature, to conserve and to coexist - on nature's terms - is a constant theme. ... If all Scottish writing in this genre is of the same order as Crumley's then we certainly are impoverished.' Stirling Observer

'... he draws us into his latest book on Scotland's wildlife... with unhurried ease and gently flowing enthusiasm. ...His observations will mostly be those of a passionate naturalist; then another instinct takes over and he will write poetry. Every well-chosen word is our hearts and into our imaginations. Jim Crumley has been called the best nature writer now working in Great Britain and this new book proves how true that is. ... I particularly enjoyed "Wind's Work" which doesn't actually deal with specific birds or animals but is a simple, beautifully-crafted description of a walk in the high woods during a gale. ... a thoroughly enjoyable book and though-provoking work'. The Scots Magazine

'...His style is fluent and poetic making this book a joy to read.' Scottish Bird News

Something Out There
Jim Crumley