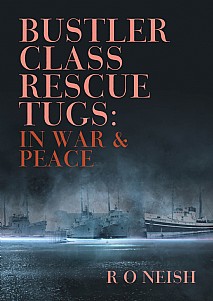 This new book reveals the part played by the eight Bustler Class Rescue Tugs built at the Henry Robb Shipyard during the Second World War and will shed more light on the almost-forgotten part played by this country’s mariners. The men and women who were rescued under the most trying of times and dreadful weather conditions would no doubt have felt immense gratitude to the brave souls who formed part of the huge maritime effort, both in war and peacetime.

This is the story of the small force of much-needed rescue tugs that were built during the dark forbidding days of the Second World War, when Great Britain had only the ships and men to bring in the raw materials that were required to fight against the might of Nazi Germany and its Allies.

This compelling story shines a spotlight on the small, but very significant work done over many years by His and Her Majesty’s Rescue Tugs in defence of the realm, and which benefited seafarers all over the world.

The author’s very detailed account of the contribution made by HMRT in general, and the Bustler Class in particular, is an excellent read, and has brought to life the immense impact that these rescue tugs have had over many years, usually in dire circumstances, and especially during the Second World War. Many of these ships also served with the Royal Fleet Auxiliary (RFA) and this story recognises the part played by these heroic rescue tugs in accounts of many convoys that crossed the seas and were attacked by hostile forces.

This fine volume will help to raise the profile of these magnificent small and immensely powerful vessels, and of course their highly-skilled crews without whom these heroic achievements would not have been possible.

This will be of great appeal to anyone interested in ships, tugs and shipbuilding, maritime history along with the maritime heritage of the UK.

In the Treacle Mine
J W Richardson