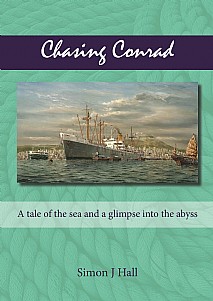 A tale of the sea and a glimpse into the abyss

Simon Hall’s second book is set in the mid-1970s during the closing years of the golden age of British shipping, when cargo carriage at sea saw radical change and the romance of being at sea in old-style cargo ships came to an end. Hall’s account is of five years during which he worked as a junior officer in the Far East and South Pacific.

This is no ordinary memoir; the prose is vividly expressed, often shocking, sometimes elegiac as evidenced by his description of a night watch in the Indian Ocean: alone on the bridge wing in the warm tropical night, I heard the wind sing through the stays as an Aeolian harp and I felt anointed by my good fortune. On loading rubber and timber in Sarawak he writes: The whole pace of life slowed, it felt as torpid as the idle Rajang river itself and we all slowed with it. Everything was so still, so unmoving, as if the whole world had lain down and gone to sleep.

His descriptions of jaunts in forgotten parts of the world are strikingly expressed and there is added poignancyfrom the charting of Hall’s struggle against decline into alcohol abuse, expressed in a way that is in turn both sad and shocking: I ordered another cold beer and lit another cigarette, then sat with the ghost of my past dreams while the afternoon died around us and we surveyed the wreckage of all my hopes.

This is an important work that captures an age now vanished, written in a style too rarely encountered.

A well-written book that will appeal to all who are interested in ships and shipping, modern and maritime history, and those who enjoy well-told travellers’ tales of fascinating people and places.

'Book of the month... Hall is a gifted writer and for those of us who sailed on similar ships, it will awaken many memories of how life at was then. This book is a must buy! Highly recommended'. Sea Breezes

‘…There are many humorous as well as fraught episodes in this book, all of which would be interesting and entertaining for his readers…’ QSO

‘…I enjoyed his descriptions of jaunts to various parts of the world… This, along with his first volume, is an important work that captures the spirit of an era of our maritime heritage now vanished but bridged for us by works such as this’. Julian Stockwin Read the full review here

'His is a book of recollection and memories, rare in that unlike most such books by old sailors, he recalls the bad times as well as the good; a young man chasing Conrad and a rapidly disappearing way of life'. Lloyd's List