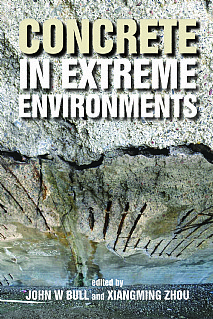 Contemporary events have shown that buildings designed to modern day codes need to be able to resist accidental extreme actions such as impact, explosions, weather, chemical and seismic events.  This is one of the reasons for the present reviewing of the Eurocodes used to design concrete structures.  The definition of the use of concrete used in extreme environments is difficult, but extreme events are usually defined as those rare events which occur at the extreme ends of the statistical distribution in a particular situation.  Often the clients who order the concrete structures are unable to determine the extremes of environments the concrete will encounter and rely on the designers and construction companies to be able to predict the service conditions.

Consequently, for the professionals who have an interest in the design, manufacture and constructional use of concrete in extreme environments the chapters in the book will be extremely useful as they describe actual experiences of concrete at the extreme limits of the unusual environments.  Concrete is composed of a range of materials and by including additional chemicals concrete’s performance can be extended.  Initially the designer must address the environment into which the concrete is introduced.  An area of concern is where the design team is not able to access expertise of other disciplines and then may readjust their existing parameters on a predictive rather than a scientific basis.

To help increase access to a range of experiences, the chapters in the book have covered areas such as recognising severe environments, construction materials failures with concrete in extreme environments, high cycle fatigue of concrete structures, in harsh environments both in design and monitoring, corrosion parameters in a buried pilot nuclear waste container, effects of extreme environments on concrete dams, models for prediction of chloride ingress in concrete exposed to de-icing salts, reactions of cements in geothermal walls and cements reactions in biogenic environments.

This volume will provide a valuable tool for practising engineers, designers, contractors, researchers and advanced students in civil and structural engineering. Scientists and engineers in the associated disciplines of materials science and engineering, materials chemistry and construction will find much of interest.

‘There are many books that examine the behaviour of concrete in adverse environment…but this takes concrete to another level… the chapters describe actual experiences in these unusual environments. …this is a reassuring book that shows that concrete can be designed to deal with some of the most severe, extreme environments from around the world’. Concrete

'To help increase access to a range of experiences, the chapters in the book have covered areas such as recognizing severe environments, construction materials failures with concrete in extreme environments, high cycle fatigue of concrete structures in harsh environments both in design and monitoring... ...will provide a valuable tool for practising engineers...' Concrete Plant + Precast Technology

‘…a variety of authors describe their experience in using concrete in such environments as concrete dams, sewer networks, heavily-salted roadways, nuclear waste containers, and offshore wind-turbine towers…Survival depends upon…having a deep understanding of these forces both in the lab and in service’.  Concrete Construction

Decorative and Innovative Use of Concrete
Graham F. True