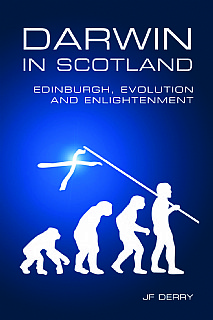 This is the first book on Darwin and Darwinism that wholly concentrates on his time spent in Scotland and the key contributions to his future insights made by the Scottish Enlightenment and the University of Edinburgh. Darwin developed his theories because he attended Edinburgh University - although he participated little in formal tuition, it was through interaction with his tutors, peers and extracurricular groups that he was exposed to an ethos of naturalistic philosophy rooted in the Scottish Enlightenment and, by direct descent, the Ancient Greeks. If he had bypassed Scotland and gone straight to Cambridge, his education would have been theologically-based and unlikely to have given him the perspective that led him to question the prevailing doctrine.

It is also the first book to explore the subsequent impact of his work on modern day biologists at the University of Edinburgh. How far have we moved on since Darwin made his discoveries? Are his theories still relevant to modern-day science? Can we say if they will be relevant in the future? And, what should we be teaching future generations?The relevance of Darwin in debate is as important and volatile now as when The Origin of Species was first published a century and a half ago. Science and religion seem to have reached an impasse. Intelligent Design, the conflicting view to Darwin's theory of natural selection, is the new kid on the block that the science gang wants nothing to do with. All the major issues in evolutionary study are covered here, through interviews with scientists, educators and creationists. They include some of the world leaders in the biological sciences at Edinburgh University, and they are most revealing about what Darwin has meant to them and their work.

The book provides both introductory notes to academic and non-academic topics, and also delves in to deeper subject areas, without becoming inaccessible to the lay reader. As such, in addition to providing interesting casual reading it also forms stimulating background reading for students of Scottish studies, as well as a spectrum of disciplines from biology to theology. It is applicable and attractive to anyone who holds a view about Darwinism due to its non-technical approach.

'...J. F. Derry has added a useful contribution, setting the scene as he does for the understanding of just how influential the city of Edinburgh was to the Pre-Cantabridgian student. Derry's book examines in close detail the contribution that the Scottish physical and intellectual landscape made to Darwin's development as a theoriser grounded in the collection and compilation of facts.' Palaemtological Association Newsletter

'...Derry is able to point to the crucial influence that Enlightenment Edinburgh was to have on Darwin's developing mind.' Scottish Field

'An encompassing look at the time spent here by the father of evolution, it features interviews with God Delusion author Richard Dawkins, linguist and philosopher Noam Chomsky, Astronomer Royal Martin Rees and Darwin's great-great-grandson RandalKeynes among others.' The Courier