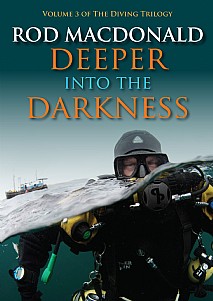 Deeper into the Darkness

In Deeper into the Darkness Rod takes the reader diving to explore many more famous wrecks around the UK from the Great War. These include HMS Pathfinder and HMS Audacious – the first British battleship to be lost to enemy action in WWI. The wreck of HMS Hampshire on which Lord Kitchener perished on a secret mission to Russia in 1916 is visited along with HMS Vanguard, which blew up at anchor in 1917 in Scapa Flow. The K-class submarines lost in the Firth of Forth during the Battle of May Island in 1918 are dived, along with UB-116, the last German submarine to be sunk in action in October 1918.

Rod then leaps forward in time to the Pacific during WWII and visits the American shipwrecks from the Battle of Guadalcanal, along with daring penetrations into the stunning Japanese wrecks lying at the bottom of the Truk and Palau Lagoons.

The development of technical diving is brought up to the present day where closed circuit rebreathers utilising mixed breathing gases allow Rod to go deeper into the depths in search of lost shipwrecks.The wreck of the SS Creemuir, torpedoed and sunk off north-east Scotland in 1940, was first dived by Rod in 2012. This exploration reveals the human side of shipwrecks when Rod’s team recover the Creemuir’s bell and present it to the sole surviving crewman, Royal Navy Radio Officer Noel Blacklock.

The latest developments in shipwreck exploration taking place at Scapa Flow are recounted before the book concludes with the scandalous desecration of the naval war graves of many nations at Jutland, the South China Sea and the Java Sea.

Written by one of the world’s leading shipwreck explorers, this book is filled with danger, adventure and intrigue and will appeal not just to divers but to anyone who is interested in history, the sea and the mysteries hidden in its dark depths.

'...is every bit as entertaining as the first two volumes. ... If you like diving, you'll enjoy this book, if you like shipwrecks or maritime history you will love this book'. SubSea

'Right at the top of his game. ...when we read one of his books it has the ring of authority we all value. ...historians who would find it as absorbing as divers. ...a heavyweight addition to the diving library'. Divernet

‘The Darkness Below and Deeper into the Darkness complete the trilogy and together take the reader on a spell-binding journey beneath the waves’. Julian Stockwin

'There are few people with more diving tales to tell than Rod Macdonald - and luckily for us he's happy to tell them...' British Diver

‘…these two books [Into the Abyss and Deeper into the Darkness] are very valuable records of important wrecks which are slowly disintegrating over the years and may soon be gone forever’. In Depth

'Fascinating underwater images which show perfectly preserved shipwrecks in sea beds including ones sunk off the coast of the UK in both world wars...' Daily Mail online

‘This book is a must for any divers and wreck explorers and I would very highly recommend it to such readers’. Shipping Today & Yesterday

Into the Abyss
Rod Macdonald