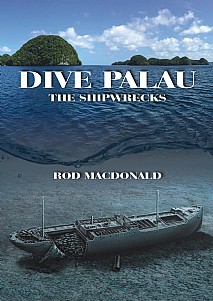 Recounted with his usual level of meticulous historical research, Rod weaves an easily readable account of the build-up to and implementation of Operation Desecrate 1 – the raid undertaken to destroy Japanese ships and aircraft in the lagoons of Palau. He uses his intimate knowledge of shipwrecks to reveal in glorious detail each of the 20 major Japanese WWII shipwrecks lying at the bottom of the Palauan lagoons today.

On 30th March, 1944 Grumman F6F Hellcat fighters made an Initial fighter sweep of the lagoon to destroy Japanese air cover. Simultaneously Grumman Avenger torpedo-bombers dropped their mines in the channels around the lagoon to block Japanese ships attempting to escape the following onslaught. With the Japanese naval fortress quickly becoming a prison and with Japanese air cover quickly destroyed, successive group strikes of torpedo bombers and dive-bombers swept over the lagoon, sinking the shipping and destroying the airfields. Palau was neutralised as a Japanese naval and air base in a repeat of the same Task Force 58 raid, Operation Hailstone, on Truk Lagoon 1,000 miles to the east just six weeks earlier.

Today, 20 major Japanese WWII shipwrecks lie in the beautiful clear waters of the tropical paradise of Palau surrounded by reefs and coral wall drop-offs. A number of long-lost wrecks have recently been relocated including a Japanese freighter filled with depth charges and Army helmets. This was found in 1989 but remained unidentified until now – after painstaking research Rod reveals her identify for the first time in the book. Each wreck is covered in detail and is supported by underwater photography and by fabulous illustrations by renowned artist Rob Ward.  The shipwrecks of Palau are now revealed.

This will be of enormous appeal to divers, anyone interested in maritime and WWII history, as well as those with an interest in shipwrecks.

‘Each of the main wrecks is supported by carefully researched recording of the vessel’s history and final demise, together with excellent colour photographs, artist’s illustrations and the essential details needed to support a dive. So if you are heading for a dive holiday there, lucky you, and you will need to take this book with you’. Warship World

‘Rod Macdonald’s books are always eagerly awaited, and it is the level of detail that wreck-dive enthusiasts relish. His latest offering Dive Palau: The Shipwrecks, is no exception. ...sits perfectly alongside Dive Truk Lagoon. ...I enjoyed this easy-to-read book from cover to cover, but it would work equally well to dip into for reference’. Diver

‘...a rather magnificent coverage of an action taken on 30 March 1944 in WWII on the island of Palau. ... He has managed in such books to admirably blend a combination of historical research, capable writing, and excellent illustrations. These works add a new dimension to understanding their subject matter, and should be considered well beyond the concepts of “dive books.” Highly recommended’. Australian Naval Institute

‘Indispensable guide to wreck diving in this remote Pacific atoll. ...this is as near a definitive wreck diving guide as you’ll ever read. ...the level of technical research in this book is breathtaking. Details such as when an attack was launched, the weight of explosive charge used or the exact power output of a Zero fighter. It’s dizzying. ...a phenomenal record. ...brings an almost forgotten piece of war history firmly to life, and knowing exactly what happened in Palau – and why – would add an important new dimension to diving there. If you have an expedition planned, read Rod’s book before you go’. British Diver full review

‘Diver Rod Macdonald became intrigued by the ship [Helmet Wreck] while researching his latest book Dive Palau – The Shipwrecks, which catalogues a series of wrecks found in the waters around the small Micronesian nation and the history of how they got there’. The Herald

‘…displays his breadth of knowledge of the numerous ship and plane wrecks scattered around the theatre of the Pacific. … this is a well-researched and readable volume, which present a soundly considered introduction for those interested in World War II history. I would recommend this book to anyone interested in increasing their knowledge of Palau’s history and the Pacific conflict, or the archaeology of deep-water warship sites’.  International Journal of Maritime History