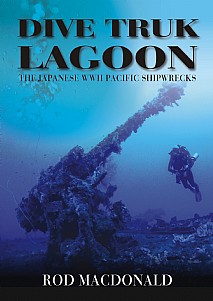 The greatest wreck diving location in the world!

Truk Lagoon is quite simply the greatest wreck diving location in the world. Scores of virtually intact large WWII wrecks filled with cargoes of tanks, trucks, artillery, beach mines, shells and aircraft rest in the crystal clear waters of the Lagoon – each a man-made reef teeming with life.

Truk was the main forward anchorage for the Japanese Imperial Navy and merchant fleet during the early days of WWII. Protected by a 140-mile coral barrier reef, with only a few heavily defended entrances, it seemed a well-protected safe anchorage. The lagoon had been fortified by the Japanese in great secrecy during the 1930s – the Allies knew little about it.

By 1944, the tide of war had turned against the Japanese – the Allies were pushing westwards across the Pacific islands towards the Japanese homeland. A daring U.S. long range aerial survey showed the lagoon with the full might of the Imperial Japanese Navy; battleships, cruisers, aircraft carriers, submarines and destroyers, along with scores of large supply ships and transports. The Allies decided to attack immediately. Sensing this, the Imperial Japanese Navy scattered but the merchant ships remained to offload their cargoes of aircraft, tanks, artillery, mines and munitions. Other heavily laden supply ships continued to arrive, unaware of the Allied assault plans.

Fresh from the Kwajalein Atoll assault, Task Force 58 was formed for an immediate attack – Operation Hailstone. In total secrecy, nine U.S. carriers holding more than 500 combat aircraft steamed towards Truk – supported by a screen of battleships, cruisers, destroyers and submarines. Before dawn on 17 February, Strike Groups of 12 Hellcat fighters swept in low towards Truk under Japanese radar and immediately began strafing Japanese airfields. Soon, hundreds of aircraft were involved in one of the largest aerial dogfights of WWII which was over within an hour. With air superiority established, U.S dive-bombers and torpedo-bombers spent the remainder of the day and the following day sinking all the large ships trapped in the lagoon.

With Truk neutralised as a naval and air base, the Pacific war soon ended. The sunken ships of Truk Lagoon with their war cargoes were largely forgotten about until 1969, when an expedition by Jacques Cousteau located and filmed many of the wrecks. The resulting TV documentary, Lagoon of Lost Ships, went viral. Truk’s secret was out – and the beautiful wrecks, untouched since WWII, have proved an irresistible lure for thousands of divers each year since then.

This will be of enormous appeal to divers, anyone interested in maritime and WWII history, as well as those with an interest in shipwrecks.

Watch a review by Bob Willis on YouTube - https://www.youtube.com/watch?v=WOtIAt6pJDY

'As well as being of enormous appeal to divers Dive Truk Lagoon will be a fascinating read for anyone interested in WWII history and shipwrecks'. Dive New Zealand | Dive Pacific

'The book takes the reader on a journey through these waters and shipwrecks. Illustrated throughout with beautiful colour and b&w photographs it will appeal to, not only those with an interest in diving, but also anyone interested in the history of WWII and shipwrecks'. Sea Breezes

'...a well researched book. It is an interesting read and I recommend it'. The Log

'Macdonald's enthusiasm is infectious. Macdonald has produced an extensive and fascinating compendium of the wrecks that now lie peacefully in this beautiful lagoon'. Work Boat World

'Macdonald has produced an extensive and fascinating compendium of the wrecks that now lie peacefully in this beautiful lagoon'. Ausmarine

'Rod Macdonald's tome is arguably the definitive guide. Dive Truk Lagoon is essential reading for anyone planning a trip to this remote part of the world. ... It's a rich and hugely detailed work that is interesting enough for this reader when he was sat on a British sofa. For anybody planning to travel halfway round the world and see what lies beneath Truk lagoon for themselves, it's pretty much a must-read'. British Diver

'This book is remarkable... ...an excellent historical background to the build-up of war in the Pacific, WWII and its aftermath. This is a remarkable account serves as a reminder of the devastating potential of wartime combat. It also represents a stunning record of 'living history' in one of the most beautiful parts of the Pacific'. Bulletin, Liverpool Nautical Research Society

'...readers of his previous books will know they are in for a treat. ...a well-crafted history of the area and the American attack. This is an interesting read, with strong attention to detail and use of imagery, ideal for history buffs and divers alike...' Nautilus Telegraph

'It is a remarkable book in a number of ways... The level of detail is impressive. This well researched book will be of particular interest to all divers as well as to those who are avid readers of naval history - with submariners not forgotten - and is recommended as a good Christmas present to the enthusiast'. In Depth

'A new wreck bible. ...I was hooked. ...this book has it all... ...this book will appeal to all wreck-divers and is a must if you're thinking of going to Truk. I found it hard to put down as it continued to bring back memories of my own trip'. Diver

'...the secrets of Truk Lagoon are the subject of a stunning new book... ...this incredible series of images in which heavy artillery, tanks, planes and even a samurai sword are clearly recognisable on the sea bed. ...is both a diving and historical guide, which is some achievement'. Sunday Mail

'...revealed the secrets of the greatest and most spectacular underwater wartime graveyard in the world.' Press and Journal

'...a delight for me and thankfully it didn't disappoint. ...this historical section would make a fantastic book on its own, and as an introduction to the wrecks of Truk it is a magnificent piece of work. ... The text descriptions really bring the wreck to life and give you the perfect briefing to plan your dives and ensure that you see all the key features and hidden gems. Rod has a way of taking you with him through the wrecks, reliving the dive and making you feel like you are following him... If you have not seen Rod's wreck drawings and read his discriptions, you will be highly impressed and will likely want to plan your trip to Truk immediately after putting it down. ... If you want the perfect birthday or Christmas present for yourself or a diver, this is it! I used to say that Hailstorm over Truk Lagoon by Klaus Lindemann was THE book on Truk, but Dive Truk Lagoon has replaced it in my mind and my library. Another cracking book by Rod and one which will become the divers' bible for Truk diving in the future.' Gordon Mackie, Scottish Diver