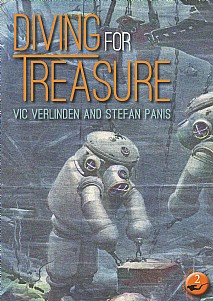 Discovering history in the depths

This book recounts the efforts over many years to dive wrecks that contained treasure in one form or another. The often prolonged and sometimes dangerous expeditions tell of dives to many ships that were wrecked while carrying tons of gold or other valuables. Many of the wrecks came to lie at great depths which demanded considerable diving expertise using rebreathers which allowed longer dives to be performed.

The authors are both diving experts and in addition to the accounts and historical pictures they have added their own photography to convey to the reader the challenges of the dives undertaken. The technical demands were considerable, from adjusting the camera housing to accommodate the depth to diving at particular times of the year because many of the wrecks were situated in areas of high seas and extreme currents. Many of these wrecks have been the subject of concerted efforts from salvage teams but success could never be assumed.

It took several years to visit and photograph the wrecks mentioned in the book which provides a fascinating account of the vessels and their treasure, and the challenges of diving in what can be a dangerous environment. Each entry provides details and a brief history of the vessel and the means of its demise, enhanced by a modern diving account with photographs. As such the book will be of great interest to all divers whether active or armchair, and to anyone with an interest in maritime/military history

This book will be of great interest to all divers whether active or armchair, and to anyone with an interest in maritime/military history.

‘This book is a must for your collection’. SubSea

‘…each of the individual stories are brief but well written…there was plenty of detail on the ships and their fate. I particularly liked that the authors have dived many of the wrecks… …very good illustrations and some remarkably good underwater pictures taken in very poor conditions in the North Sea. I really enjoyed this book which will appeal to all you wreck hunters out there…’ Scottish Diver

BOOK OF THE MONTH!

‘The photographs are really engaging and really give a sense to what it must have been like exploring these wrecks that lie on the ocean floor. A thoroughly enjoyable book written and compiled by two authors who, as technical CCR divers and photographers, clearly know their subject. Highly recommended’. Sea Breezes

‘This is a well put together book backed up with good photographs and I would highly recommend it to anyone with an interest in this area’. Shipping Today & Yesterday

‘…provides histories of a good range of sunken ships from the 19th and 20th centuries, and has high-quality illustrations throughout … it’s an attractive publication and an easy read’.  Nautilusint.org