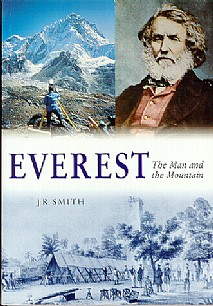 Everest - the Man and the Mountain

Mount Everest is known to everyone - but what of the person after whom it was named? This book traces the life and profession of that person, George Everest. In particular, it covers his life dedicated to surveying in India during the first half of the 19th century.

George Everest went to India at the tender age of 16 but within a few years was leading survey parties into the remotest areas of the subcontinent. His particular passion was geodesy - the determination of the size and shape of the earth and he soon became Superintendent of the Great Trigonometrical Survey. In addition, he spent many years as Surveyor General of India.

The entire work draws heavily on original correspondence archived in India and this gives a good flavour of his character both as a person and as a manager. Everest was a surveyor, linguist, engineer, astronomer and religious philosopher but in the pursuit of his goals he did not suffer fools gladly. It was recorded that he was so indefatigable - his determination to complete his appointed task under extreme conditions was second to none - that his contemporaries were accustomed to speak of him as 'Neverrest'.

This book provides a fascinating insight into the life of a remarkable man and shows amply why the earth's highest peak now bears his name.

Mount Everest is known to everyone - but what of the person after whom it was named? This book traces the life and profession of that person, George Everest.

'... it's a very good read and is, without doubt, now the definitive work on Colonel Sir George Everest'. '... laid out very well ...' 'The more you get into this book, the more you are amazed at the man and his achievements'. '... a very good read that left me with the feeling that the man deserved to have the world's highest mountain bear his name ...' The Ranger

'...The work is scholarly and thorough, well-referenced and easy to follow ... its strength must lie in that it may inspire others to carry forward research...’ Surveying World

'After reading Everest - the Man and the Mountain, you'll feel as if you know this great and eccentric surveyor whose legacy is a mountain'. POB Magazine

‘...is an excellent read and as well as providing a fascinating insight into ‘Everest the Man’, it covers both the development of many innovations in surveying that contributed to the success of the survey...’ Civil Engineering Surveyor

‘...it is packed with interesting stories and details on all aspects of Sir George’s private life and his monumental contribution to geodesy...’ High Witness

'... a quite encyclopedic book ... The book ... is exhaustively researched. ... This book has to be the definitive study on Sir George Everest. ... this is unquestionably a book every library and school should purchase' Geomatica