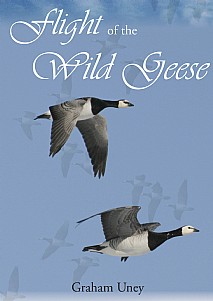 Flight of the Wild Geese

The sight of strings of wild Barnacle geese flying overhead, with a noisy chorus of honking, will be a familiar sight to many. However, following their migration, little is known about the lives of these sociable geese. Flight of the Wild Geese tells the story of the winter wildlife of the Solway Firth, that wonderfully wild estuary set between the rugged hills of Cumbria and the rolling farmland, moors and forests of Dumfries and Galloway. It explores the links that these beautiful places share with the most remote islands of the North Atlantic, and with the stunning landscapes of the high Arctic. This is a book of birds, of people, and of places.

The author's sea journey takes in a number of remote islands, beginning with the two Scottish outliers of North Rona and Sula Sgeir, then venturing ever northwards via the stunning rocky coasts of the Faroe Islands, the black-sand volcanics of Jan Mayen, and the great sea bird colonies of Bear Island before encountering pack ice in the vast sea channel of Storfjorden. Here, in Svalbard's Arctic waters, ivory gulls roamed the ice islands searching for food, while seals hunted the open flats between. Arctic wildlife filled every space, backed by an array of glistening snow peaks, their glaciers carving rivers of ice down to the sea. This was the author's first view of Svalbard - Kingdom of the Ice Bear.

The author also reflects on his life as a writer, photographer and environmental surveyor. Growing up in the flatlands of East Yorkshire where his love of wildlife was instilled, he yearned to know more about where the winter-visiting birds went during the summer. He learnt a great deal about waders, ducks, geese and swans at the Humber Estuary but, once these birds had migrated to cooler climes in the summer, their lives were a mystery. Later in life and with the Solway Firth on his doorstep, where some of the largest numbers of geese are to be found, he decided to find out.

This handsome book will be of immense appeal to all bird lovers, anyone with an interest in wildlife, the natural world and all those who enjoy travel books.

'ALTHOUGH ESSENTIALLY AN EXPLORATION of the remarkable life-cycle of the thousands of barnacle geese... ... ...this book offers a good deal more. ... The highly personal narrative is interspersed with the author's accounts of other trips and experiences in Scotland... ... ...making this as much a love letter to Scotland's wild places as a book about geese themselves'. Scotland Outdoors

'... This is a book by a birder, and a birder's book. The loving descriptions of the Solway and other reserves, the appreciation of landscape and wildlife other than birds, all come as a bonus. ... The photographs... ... ...have an attractive immediacy about them. ... ...if you enjoy reading about birds and their homes you'll enjoy this book'. Habitat

'It's a fine travel tale, mixed with natural history and keen observation en route. ... ...this is the perfect book to read...' Waterlife

'His travels make fascinating reading, rich in observation of all wildlife from the Solway Firth to Svalbard. An enjoyable and illuminating read evoking a real sense of adventure'. Scottish Bird News

'...what makes the book outstanding is the personal thoughts that come over and infuse on the reader's mind. ...the magical chapters such as Simer dim, Crossing the Arctic Circle, Bear Island and the long chapter on Summering in Svalbard... ...the very readable text.' The Highland News