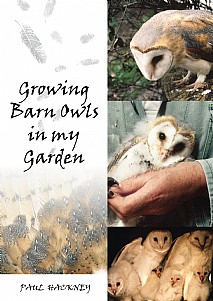 Growing Barn Owls in my Garden

The barn owl is a ‘flagship’ species, at the top of the food chain, and its presence or absence is a good indicator of the health of the countryside. This is the enjoyable and informative story of the author’s success in restoring this beautiful bird to areas of the country where its numbers had catastrophically declined.

From an upbringing in the Lake District, the author developed a deep interest in natural history which became an all-consuming passion. As a ‘licensed rehabilitation keeper’, he cared for a wide range of injured and orphaned wildlife, giving individuals a second chance by returning them to the wild. He reveals how and why he later graduated to barn owl conservation.

The author describes his many encounters with barn owls, from the acquisition of his first breeding pair; ‘Barney’, a completely humanised owl; to stories of the fascinating array of people involved in releasing, studying, and simply marvelling at this beautiful bird. Although there is a funny side to most situations, there are also the inevitable disasters and disappointments of conservation work, such as the accidental or deliberate sabotaging of releases or the killing of released birds. The reader shares in the author’s disappointment and frustration at the sheer cost in time and money and his frequent self-doubt about the success of the whole exercise. However, there are descriptions of more enjoyable activities such as bird ringing, watching home-grown birds metamorphose from ugly pink scraps into creatures of ethereal beauty, and the seemingly limitless energy and enthusiasm of countless landowners and volunteers who are totally committed to the reintroduction of the barn owl.

After almost 20 years, there is now evidence of a marked increase in barn owl numbers in areas where the author has worked. During this period, he bred and released around 250 birds, put up nest boxes and advised on barn owl-friendly approaches to land management. These activities helped to reverse the decline in population as areas were repopulated and also created reservoirs of wild breeding barn owls, whose offspring colonised other under-populated parts of the country.

The return of the barn owl not only heralds a brighter future for the British countryside, but also shows, at a time of great public concern about the state of planet Earth, that the negative effects of human activity on the environment can be reversed with effort, goodwill and determination.

This book will appeal not only to everyone with a special interest in barn owls and all birding enthusiasts, but also to naturalists and those with an interest in nature and conservation.

'The barn owl is one of the glories of the British countryside... Paul Hackney, who became fascinated by barn owls... ...is now helping to repopulate Britain's woodlands by breeding them in captivity. ... There are fond memories, too, of Barney, a female barn owl who was a household companion for 15 years'. The Critics

‘An enjoyable book, written in an enthusiastic, light, easy style and crammed full of anecdotes that bring life to the subject. A good read.’ Scottish Birds

‘…a well written story of how Paul Hackney became committed to doing something about the plight of the barn owl. … This book will serve as an inspiration to those who may be called to help preserve one of our most beautiful owls in the future.’ Peregrine

‘…the entertaining and highly educational account…’ The North Staffordshire Magazine