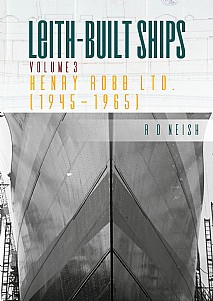 • Continues the highly-praised story of shipbuilding in Leith

• Contains a memorable collection of photographs

The story of Leith–built ships continues in this third volume from just after the conclusion of World War Two to 1965. However, the world was different; the men came back from the front and those women who had been working in the shipyards lost their jobs.

All shipyards were experiencing full order books, replacing, or repairing ships lost or damaged in the conflict, but the industry was changing albeit slowly at first. The advent of electric welding would eventually change the way ships were built leading to the demise of the Rivet Squad, which was replaced as a cost cutting exercise as it became the accepted method of ship construction.

Henry Robb Shipyard participated in the massive new shipbuilding programme with a great many vessels being ordered from two of the largest customers of the yard. Many orders came from the giant Ellerman Lines, while a great many more were ordered by other customers, such as the Union Steamship Company of New Zealand. The Admiralty also remained a customer and a few large supply ships would be built in this time.

In this volume the author has not forgotten the people who were the very fabric of the yard and community. Personal accounts are included from those who built or sailed on these vessels.

This is the story of a mighty industry, but one which nonetheless had begun its decline. In the century from 1893, this nation went from producing 80% of all the worlds’ commercial ships to producing no commercial ships at all. It is a sad fact, but this volume keeps alive the story of the Leith-built ships and the vibrant industry that once existed.

This will be of great appeal to anyone interested in ships and shipbuilding along with the maritime heritage of the UK.