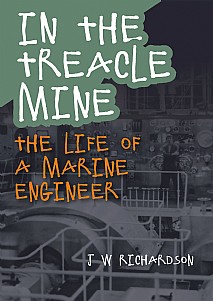 In the Treacle Mine

The Life of a Marine Engineer

If anyone has ever wondered what happens in the engine room when the Captain on the bridge rings ‘Full Ahead’ on the telegraph, then this book will enlighten the reader. This is a story of one man’s life at sea, from his beginnings as a lowly cadet to his qualification as a Chief Engineer. There are many anecdotes about his experiences – some amusing and some terrifying – together with pen portraits of a few of his fellow seafarers and the places he visited.

In the Treacle Mine starts in the 1960s when steam power was still the preferred option for larger and more powerful ships but over the following decade, the availability of ever more powerful and more fuel-efficient, diesel engines sounded the death knell for steam propulsion. Now there are only a few preserved steamships left as a reminder of how things used to be down below in the ‘treacle mine’, which was how Geordie marine engineers described the engine-room.

Despite the fact that steam power has disappeared from everyday use, there are still a great many enthusiasts from all walks of life who are prepared to give up their spare time to ensure that steam lives on. This dedication means that heritage steam railways, steam traction engines and even the occasional preserved steamship, can continue to operate and give pleasure to millions of visitors every year.

One whole chapter is devoted to a voyage with an 'up and downer' (a steam reciprocating engine) and although the remaining steamers were all turbine vessels which may lack the same visual appeal, there will still be much that will be of interest to any steam enthusiast.

Following his experiences with steam, the author eventually began working on motor ships but these were also not without incident and there is much in this book that will spark the interest of anyone who enjoys stories of the sea and seafarers.

Readership: this will be of especial appeal to all steamship enthusiasts, seafarers and anyone with an interest in the Merchant Navy and sailing.