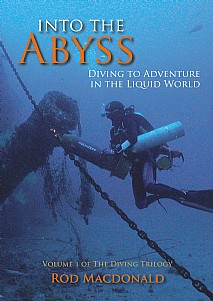 Diving to Adventure in the Liquid World

Into the Abyss, the first volume in The Diving Trilogy, is a fascinating collection of true life diving adventures from Rod’s long and varied diving career. It follows his progression from novice diver in the 1980s through the dangers of the deep air diving era and on to trimix diving in the 1990s where divers began to use commercial mixed breathing gases as the sport of technical diving was born. This opened up vast, previously inaccessible, swathes of the seabed, ushering in a great era of discovery of virgin shipwrecks, lost in time.

Rod takes the reader to famous shipwreck sites around the world, from the sunken Japanese Fleet at the bottom of Truk Lagoon and Palau in the Pacific, to diving the third largest whirlpool in the world - the Corryvreckan Whirlpool off the west coast of Scotland. He describes this and many other terrifying incidents in which he and his colleagues have come close to death.

The book is filled with danger, drama and excitement and chronicles his all-consuming passion, taking the reader on a spellbinding journey beneath the waves.

Written by one of the world’s leading shipwreck explorers, this book is filled with danger, adventure and intrigue and will appeal not just to divers but to anyone who is interested in history, the sea and the mysteries hidden in its dark depths.

‘The Darkness Below and Deeper into the Darkness complete the trilogy and together take the reader on a spell-binding journey beneath the waves’. Julian Stockwin

'This is a very good read and I would highly recommend it to anyone with an interest in the area'. Shipping - Today & Yesterday

‘…these two books [Into the Abyss and Deeper into the Darkness] are very valuable records slowly disintegrating over the years and may soon be gone forever’. In Depth

‘...will be a revelation. ...this book has the lot. Macdonald really was on a voyage of discovery, and he shares it in intricate detail, as if he was sitting beside you, telling the story in person. ... All the essence of diving at the cusp of the technical revolution is here. ...this is the life of a man who was out there pioneering and discovering... This book is utterly marvellous and deeply interesting’.  Diver Magazine

‘This is a journey through Rod Macdonald’s logbook, how he started, how he progressed to wreck diving and how that led to Trimix and technical diving... I cannot remember reading a dive book that had me laughing out loud. ... will appeal to divers and non-divers alike. It should be compulsory reading for anyone starting out on their own adventure. It is the best book on diving I have read for years and I cannot recommend it enough’. Scottish Diver Magazine

Deeper into the Darkness
Rod Macdonald