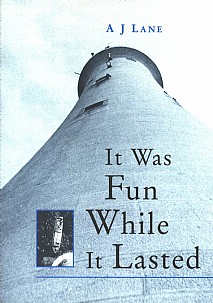 It Was Fun While It Lasted

A lively, at times hilarious, first-hand account of a lighthouse keeper's life in the last traditional years before the introduction of helicopter reliefs and automation.

Arthur Lane entered the Service in 1953 as a fugitive from the Birmingham branch of a large insurance company, who seem to have made no attempt to get him back. His adoption of their premises as the operational headquarters of a Gas Engine Club with potential for world-wide growth found no echoing enthusiasm at management level.

He transferred his entrepreneurial talents to the service of Trinity House, and they weren't always appreciated there either. The next seven years and twelve lighthouses were passed in a nightmare for colleagues as they experienced and tried to survive the Motor Horn Call Sign, the Exploding Mortar, and the Letter to The Times episodes at the Eddystone, and the affairs of the Impersonated Policeman, the Short Circuit and the Three Piece Suite elsewhere!

Arthur Lane admits lighthouse life could be pretty hectic, but he still manages to give us as complete an account as we are now ever likely to get of what it was like to keep a lighthouse in its last traditional years when, for every eight weeks' spell of isolation, you'd be likely to do another week and more in overdue.

'... seventeen engaging chapters... ...Lane's original author entries, which transport the reader to tower-shaking storms at the Eddystone, and to hilarious episodes on various lights, including a side-splitting account of some creative electrical re-wiring... ...dryly witty and irreverent but he also writes with great sensitivity... His journals and remembrances of lightkeeping are at once comic and poignant, and he has captured the uniqueness of a service and way of life now gone forever'. The Northern Mariner

'A highly personal account of a keeper's life in the 1950s which no pharologist should neglect to read and absorb from cover to cover. This is what it was like'. Journal of the Association of Lighthouse Keepers

'A highly entertaining yarn... The author's sense of humour threads its way through the pages of the book, binding together many anecdotes of life as a keeper over seven years. ...you will just have to read the book!' Leading Lights

'Thanks for publishing It Was Fun While it Lasted. If he'd been a 27-year-old coke-head from Camden it would have made the Booker prize shortlist. This is the best book I have read in ages. Is A J Lane still alive? I can't find anything about him anywhere' - an 18 March 2007 e-mail to the publisher from Dave Connor, London