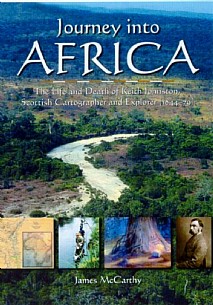 The Life and Death of Keith Johnston, Scottish Cartographer and Explorer (1844-79)

This true and dramatic story begins with the finding of the last expedition diary of a forgotten Edinburgh cartographer - Keith Johnston. The diary was lying in the Royal Geographical Society of Scotland's storeroom and concerns his last, fatal expedition into the interior of Africa. Johnston's family background in 19th-century Edinburgh is described as is the profound influence of his father, one of the great figures in the development of geography and cartography. As curator of maps to the Royal Geographical Society, Keith Johnston became embroiled in the great controversies of the time surrounding Livingstone's claims to finding the source of the Nile. Frustrated with his deskbound job, he conducted a survey of the Paraguayan-Brazil border, where his adventures were to establish his reputation as a competent explorer and ultimately led to his leadership of the Royal Geographical Society's expedition to find a feasible trade route to the central lakes of Africa. The influence of David Livingstone and his tense encounters with H.M. Stanley provide a background to the final fraught relationship with his colleague, Joseph Thomson, during their prolonged stay in Zanzibar. Shortly after the expedition into the interior began, Johnston contracted dysentery and tragically died in the village of Behobeho at the early age of 34.

Searching for Keith Johnston; Auld Reekie - Edinburgh in the 19th century; Alexander Keith Johnston - "A painstaking and untiring diligence"; Johnston Secundus - the making of a cartographer; a Paraguayan adventure - the first exploration; "Only waiting the hand of civilized man"; African travel - "a chaos world"; Zanzibar - expedition capital; journey into Africa - the road to Behobeho; post mortem - the problem with Joseph Thomson.

'...this remarkable biography... ...a significant contribution, both to the history of nineteenth-century cartography and to the history of European penetration of Africa. ...a scholarly biography which is lucidly written and appropriately illustrated'. Tanzanian Affairs

'...personal and often dramatic account of his attempt to rediscover Johnston's past...In this interesting and informative book, McCarthy has gone some way towards putting this influential explorer and cartographer firmly back on the map'. www.geographical.co.uk

'...immensely readable biography... ...the incredible hardships, unsuspected pitfalls and dangers encountered within a most hostile natural and tribal environment are described with revealing detail. The verve with which McCarthy has undertaken this task comes across every page...' The Portolan

'...vivid pictures of life in a caravan are drawn and mention must be made of the many excellent photographs that are included. I throughly recommend to all who have an interest in African history but which could be enjoyed by a much wider readership, as it is very well written and is excellently laid out with comprehensive footnotes'. Journal of the International Map Collectors' Society


'...a fascinating view on to both the interaction between Victorian Scotland and Africa, and the relations between explorers and their families, and with each other. McCarthy's study is excellent on the suppressed emotions and frustrations of all the characters in this story'. The Herald

...this book represents the very best in geographical discovery and achievement not once, but twice over. It is a richly deserved accolade for this is a remarkable volume comprising a meticulously and comprehensively researched geo-historical biography and one which is uniquely characterised by its resonating Scottish geographical connotations. ...empathetic and insightful work...' Scottish Geographical Journal

Everest - the Man and the Mountain
J. R. Smith

On Foot in the African Bush
Jeff Williams