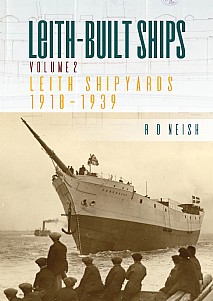 This volume includes some very famous ships with tales of adventure and new trade routes, also sadness, the launch and then the loss of the largest sailing ship ever built in a British shipyard – the five-masted auxiliary sailing barque, Kobenhavn. It recounts the days when shipbuilding should have flourished and into the tough times of the Great Depression. It remains a testimony to the skill and determination of the people who built the ships and those who served on them.

The fortunes of the three main shipyards are followed through good times to eventual closure or assimilation by the man who would open up the shipyard that took his name. Henry Robb Ltd, shipbuilders and engineers, began without a yard in which to build ships, but eventually took over firstly the old S&H Morton Shipyard, now occupied by Hawthorns & Co. Ltd. That gave Robb control of the Victoria Shipyard, and a few years later he would take over the Cran & Somerville yard, before acquiring the plant and goodwill of the Ramage & Ferguson Shipyard – the cream of the Leith shipyards.

This last yard would always have a ship on one of its slipways; at the peak they had nine slips, and were pioneers in the building of diesel-powered coasters. Always innovative and with some of the best craftsmen in the industry, the shipyard of Henry Robb quickly acquired the reputation as builders of special ships.

Leith Shipyards 1918–1939 continues the chronological story begun in Volume I and provides a fascinating illustrated story that reveals the remarkable and ongoing story of shipbuilding for which Scotland and the UK were renowned.

Chapter 4   At last – a shipyard to build in

Chapter 7   End of an era for Ramage & Ferguson

Chapter 10  War clouds on the horizon

'...the second in a series of a comprehensive four book project that covers the history of the shipyards of Leith and the Leith-built ships that were constructed there to find service all over the world'.  Arts Reviews Edinburgh

'Enjoy this walk through the bustling Leith shipyards. Ron Neish takes us on a journey brought alive in his account of shipyard construction in a narrow but epic window of history... The author clearly revels in taking his readers on a voyage rich in history, both in detail and alive in character!' Shipping - Today & Yesterday

'These introductions to so many Leith-built ships and their careers on the Seven Seas is extensive'. SeaGull

'... provides a fascinating illustrated story that reveals the remarkable and ongoing story of shipbuilding for which Scotland and the UK were renowned'. In Depth

'Liberally illustrated with photographs and ships' plans... Volume 2 introduces some fine ships and tells of their careers and trading patterns'. Africa Ports & Ships

'Volume 2 in the series fully lives up to the expectations raised by its predecessor'. Undiscovered Scotland

'...a rich and compelling narrative which will appeal to both maritime enthusiasts and general historical readers alike'. Gloucestershire Transport History

' Tells the story of Edinburgh's once-proud shipyards and the vessels constructed there...has some interesting quotes from former seafarers about their experiences onboard'. Nautilus International

'an altogether first class, deeply researched and highly commended production, fully deserving of a place on the bookshelves of those with a keen interest in the maritime and industrial history of a bygone era'. Alan Blackwood

'the ships built at Leith deserve their place in history and this book, the second of a trilogy, continues the story'. Julian Stockwin