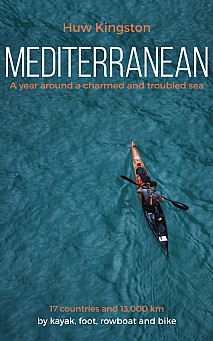 A year around a charmed and troubled sea

Huw's journey around the shores that gave birth to Western Civilisation is a modern odyssey that reminds us not only of this but also that a real and endlessly fascinating world is still out there… Quote from Tim Macartney-Snape, first Australian to climb Mount Everest and only person to have climbed it from sea to summit

On 26th April 2014 Huw kayaked away from Anzac Cove at Gallipoli, Turkey, taking the next three months to navigate around the coasts of Greece, Albania, Montenegro, Bosnia, and Croatia. Following this, he spent three months walking the full length of the European Alps, taking on Mont Blanc, at 4810m Europe’s highest mountain, in the process.

Having left the Alps behind, he biked through Southern France and across Spain before paddling his sea kayak along the coast of Andalucia to Gibraltar and across the Straits of Gibraltar, between the Pillars of Hercules, to North Africa. This was a major achievement, a full traverse of Europe in eight months; 7,500 km from Turkey. However, for Huw, this was only the half-way point.

During winter, the coldest and stormiest for many years, Huw continued the journey by bike through Morocco, Algeria and into Tunisia. The ever-worsening situation in the region forced him to abandon his bike in favour of an alternative mode of transport. A wonderful set of coincidences and circumstances saw Huw use an ocean rowboat to row, by night and day, the 1,500 km to Turkey with a young Slovenian adventurer. It was the first time he had ever rowed in his life.  For the final month Huw kayaked the last 1,000 km to where it all began along a Turkish coast now awash with the flotsam and jetsam of the worst refugee crisis in Europe since World War II. After 363 days Huw arrived back to Gallipoli, in time for the centenary commemoration of Anzac Day.

His incredible journey included many memorable events such as being held on a Turkish military island after inadvertently landing to camp, meeting an amazing one-legged hiker while crossing the Alps and arriving dog-tired and starving by kayak to Africa after local kindnesses beat back British and Spanish political differences over Gibraltar to allow a crossing of the Straits of Gibraltar.

Huw took in the extraordinary land and seascapes, the rich and varied cultures and peoples and the current state of many of those countries. This is a fascinating story of endurance, and throughout this epic journey Huw raised funds for the children of war-torn Syria, in the process becoming Save the Children Australia’s highest-ever individual fundraiser.

This is an unmissable read for anyone with an interest in adventure, travel and the countries that count the Mediterranean Sea amongst their borders.

‘The reader travels with a man constantly making life-changing choices, whether based on data, rumour or gut instinct; pushing through injury, weather, red tape or sheer bad luck’. Getaway Magazine

‘...an eye-opening journey around some extraordinary land and seascapes... ...a fascinating read for anyone with an interest in travel and Mediterranean culture’. Lifeboat, RNLI

‘...forms the engaging and insightful book Mediterranean... This charming book also gives a beautifully written account of the people the author met along the way, and paints an evocative picture of the landscapes encountered. ...is a wonderful example of the steely determination and optimism that sees him pick his end point and move heaven and earth to reach it’. Flybe Flight Time Magazine

‘If you’re looking for a great read then you can’t go past Mediterranean... ...an inspiring and entertaining read for all armchair adventurers’. Great Walks Magazine

‘...Huw’s many experiences in the countries he visited are both insightful and entertaining. An inspiring read and proof the world is still full of adventure’. Australian Geographic Magazine

‘An entertaining page-turner that shouts not be missed’. Sea Breezes

'...if this book doesn't get the travel juices going, then nothing will!' Burnley Express see full review here

‘Charming tale of a maritime adventure. ...engaging and insightful book...a story of enthusiasm... This charming book also gives a beautifully written account of the people the author met along the way, and paints a picture of the wonderful landscapes he encountered’. Nautilus Telegraph

‘...a good read filled with how the ‘Aussie’ Huw overcame many obstacles in his quest to travel around the littoral of the Mediterranean by human power alone. ...this is a colourful documentary aided by a number of pictures...’ Royal Naval Sailing Association

‘...well illustrated...will have you chuckling at the humour. This is very much a book for adventurers, avoiding the tourist hotspots, of which there are plenty, and, instead, meeting a wide range of people off the beaten track’. Canoeist

‘This book details that journey – and much more. ... As one follows the remarkable journey so the character of the author begins to appear, there is an element of fun...contains excellent photographs highlighting the journey...’ The Munro Society Newsletter

‘...dozens of intrepid exploits… have made Huw something of a legend among outdoor adventurers’. Highlife Magazine

‘…a well written tale … Presentation is neat and crisp with useful maps in addition to a comprehensive photo gallery of people and places’. Climbers’ Club (CC) Member’s Newsletter