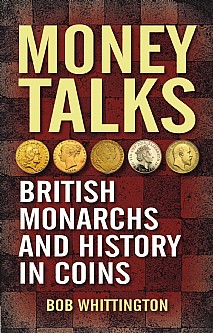 British Monarchs and History in Coins

Money Talks is a fast-paced history of the humble British coin, the events which at times literally shaped it and the stories reflected in its creation.

It has been used to barter and to bribe, to hold a cloak in place and to pay a king’s ransom, been an object of pride and a symbol of courage. The coin has witnessed the great events in history – about kings and queens and the transfer of power – and it speaks to us of generations passed, of battles and heroic deeds, of countries and empires as well as of moments we would rather forget.

Money Talks is about how such a small object of desire has been regarded as a symbol of power and authority for more than 2,500 years. It traces British history through the one thing that has come to dominate our lives – hard cash – and it demonstrates how monarchs down the centuries have used it to fund their wars, maintain their lifestyles and portray their image to prove their position or legitimatise dubious claims to the throne.

From time to time the coin has slipped out of use altogether as bartering goods was preferred to poor quality coinage for day-to-day business. It has been hoarded for safer times and simply used as adornment. But even as the modern world turns increasingly to electronic transactions moving billions around the world at the touch of a button, the coin retains its place at the heart of everyday life.

(In association with Vitabiotics)

This will be a source of fascinating information for anyone interested in British coinage and British history.

‘Cash still matters to our monarchs. ...British coins have played a huge part in our history. Bob also reveals the hidden stories behind coins’ design and how they have been used in wars, to barter, to bribe, and to pay Kings’ ransoms’. The Weekly News

‘...the perfect companion for a coin collector. ...a well-researched book, but provides the reader resources to browse. It is the kind of history book I wish I had at school when I started collecting coins. It is definitely a book of history, and numismatics at the same time. ...a great companion to place their coins into historical context’. The Blind Coin Collector Blog

In the Shadow of Power
Bob Whittington