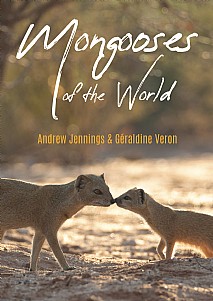 Mongooses of the World

Mongooses are a remarkable and fascinating group of small carnivores, with 25 species occurring in Africa and nine in Asia. They live within a wide variety of habitats, from open savannah to dense rainforest, and display an amazing diversity in social behaviour, with both solitary and group-living species. Yet this family is one of the least-known group of carnivores.

The general lack of public awareness about most mongoose species, and the scarce ecological knowledge of what they need to survive in the wild, are two of the many conservation threats that this group of carnivores faces, which highlights the urgent need to promote an interest in these amazing animals. As well as popularising mongooses, the book will be a valuable source of information on general scientific and conservation topics, such as social behaviour and how the loss of suitable habitats impacts animal species.

Recent cinematic films and TV documentaries on meerkats and banded mongooses have been very popular, but people are much less familiar with the other mongoose species that live across Africa and Asia – most of these are rarely seen in the wild and are very poorly known, and several have not been studied in the field. One African mongoose was only discovered by western scientists in 1958, and several others are only known from a few museum specimens and recent observations in the wild.

This well-researched, lavishly illustrated book will give a comprehensive overview of the whole mongoose family, including all the different aspects of mongoose biology, their role in human society and the conservation issues that they face, as well as detailed information on all 34 mongoose species.

Will appeal to a wide range of readers, from general enthusiasts to field scientists, and will hopefully promote a greater awareness of all mongooses and spark a keen interest in their continued survival in our ever-changing world.

'This should appeal to all mongoose fans, non-experts and experts alike'. Mammal Watching

'...is pleasantly easy to read and gives the reader information on the evolution of the mongoose, their lifestyle and behaviour...is well laid out and amply supplied with lovely colour photographs, maps and tables...I thoroughly enjoyed this book'. Wildlife Detective

'...This comprehensive guide to everything mongoose covers all 34 species...25 of which are found in Africa...from the lovable meerkat to the rarely-seen Jackson's mongoose...it is a fascinating read for the mongoose connoisseur or wildlife enthusiast'. Travel Africa

‘Mongooses might be some of the most underrated mammals on the planet…It would be a cool set to see in the wild…all 34 mongoose are covered with range maps and varying amounts of detail on their ecology and behaviour…The authors have also sourced photographs for just every species’. Mammal Watching Blog

'…a great little volume to learn more about these fascinating creatures… an excellent reference work… provides detailed information and is a great addition to my collection of mammal references'. Matthew L. Miller, Cool Green Science blog

“The book is well arrived and in perfect condition. ”
Denis, France
“Many thanks for your friendly, helpful and efficient service. It is much appreciated. ”
Chris, UK
“Thanks for your excellent service. ”
Paul, New Zealand
Dunbeath, Caithness, Scotland KW6 6EG, UK T: +44(0)1593 731 333 E: info@whittlespublishing.com