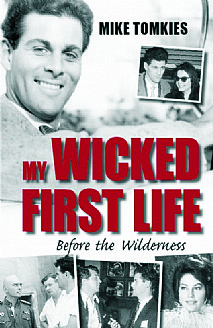 This is a boisterous, roller-coaster of a story about Mike Tomkies' extraordinary adventures after he quit his full-time career as a celebrity journalist and began working as a logger with the lusty men of the wild Canadian forests and the sea salmon fishermen - men who led a free way of life now long gone.

During his first enforced visit back to Hollywood to generate some funds, Tomkies' companion was Booto, a stray wild dog who had adopted him in the Canadian wilds and who enjoyed the attention of stars such as Cary Grant, Omar Sharif and Peter Finch during interviews.

The two also travelled around Mexico and Belize, where Tomkies spent hours with Dean Martin on the outdoor location of Five Card Stud, even photographing the star doing his own dangerous stunts. Tomkies was the first to test the new Tartan athletics track in Mexico City for the 1968 Olympics for the Daily Express, much to the annoyance of the workmen on site! Mike and Booto climbed the Pyramid of the Sun, hacked through rough tracks to the ancient ruins of Palenque, and visited the terrifying Well of Sacrifice at Chichen Itza where the ancient Mayans sacrificed young humans, hearts torn out first, to assuage the rain god Chac.

Back in Hollywood, Mike was invited to the Oscar awards ceremony where, even in his old truck, he was mistaken for Warren Beatty with compere Bob Hope joking that Beatty was so confident of winnings Oscars for Bonnie and Clyde he had brought a big truck to take them all away! After another year in the wilds of Canada, Tomkies left Booto behind and returned to Hollywood for more amazing experiences with major film stars. He went motorbiking in the Mojave Desert with Steve McQueen; spent days with and gained extraordinary insights into the life of the greatest box office star of all time, John Wayne; while Doris Day, 'America's sweetheart', offered him a film test! Tomkies had several feisty meetings with Hollywood's greatest maverick and wit, Robert Mitchum, who actually 'laid a joint' on him when he asked if Mitchum was still on pot!

The book ends with Tomkies hiring North America's greatest Red Indian guide, Clayton Mack, when they went on dangerous treks deep in grizzly country and saw 21 bears in three days - and were lucky to escape with their lives. There is a final poignant farewell to old Booto as Tomkies leaves for his new life in the wilds of the Scottish Highlands.


This is a vastly-entertaining book and recounts a remarkably full life that simply could not have been invented. With his frank and free-booting style that has touches of Jack Kerouac, Jack London and Robert Service, it will be a magnet for Mike's numerous fans and an eye-opener for anyone who is new to Tomkies' writing. This second volume in his autobiography will be of huge appeal to anyone interested in the stars, celebrities and autobiographies as well as being a hugely enjoyable read.

'...this remarkable tale of a life that veers between hobo and Hollywood, high society and lowly lifeforms, before finally heading off to Scotland to start afresh.' Scottish Field