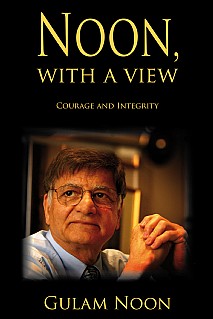 Noon, with a View

This is a candid story from a man who values highly his family, friends and country - both his birthplace and his adopted home. Despite many setbacks his indomitable spirit enabled him to meet challenges and succeed. Throughout his life he has made many friends and helped innumerable people, and when he needed help, particularly when his Noon Products factory was destroyed by fire, both friends and clients were there to help him recover.

After selling the business to WT Foods, his own charitable institution, the Noon Foundation was established and for his many efforts in this sector he was awarded an MBE. Increasingly, his time was spent working with many different charities and the Queen honoured him with a knighthood.

Sir Gulam accepted nomination for a peerage but the 'cash for honours' storm erupted. He relates the incident from his personal perspective - his anger, humiliation, frustration and depression. He considers his relations with the police, the media, the Government, Tony Blair and other senior members of the Labour Party.

He also reflects upon the tough questions facing Britain today, such as education, immigration, terrorism, and the role of the government and private citizens. He pulls no punches but his story demands respect - it demands to be read.

This book will be of huge interest to many people, whether involved in politics, business, charitable work or just seeking an absorbing and fascinating read.