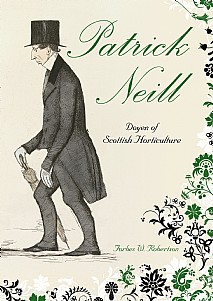 Descended from a Haddington family of printers and booksellers, Patrick Neill became head of the most prestigious printing firm in Edinburgh. Leaving his manager to run the business, he devoted his life to writing, natural history, horticulture and civic duties. His early tour of Orkney and Shetland provided an insight into the social life of the islands and he regaled readers of the Scots Magazine with an intriguing running commentary on events in the Lothians. His survey of both private and commercial gardens and orchards in Scotland was a landmark publication and he published a perceptive account of his travels in northern Europe to discover whether any of their horticultural methods might be worth adopting.

As a founder member and secretary for 40 years of the Royal Caledonian Horticultural Society, he was a key figure in its successful establishment. He was also a founder member and secretary of the Wernerian Natural History Society, whose origins related to the dominating geological controversy of that era. His role as secretary brought him into contact with most of the natural scientists in Scotland and distinguished botanists and other scientists were frequently around Neill's dinner table. His wide circle of friends included famous figures such as William Jackson Hooker and his son Joseph, Robert Brown, Sir William Jardine, Sir Calverly Trevelyan, Robert Stevenson, the McNabs, father and son, of the Royal Botanic Garden Edinburgh and the maverick botanist George Don.

To cap it all Neill won national recognition for the unparalleled diversity of species of plants, including newly-introduced species, in his remarkable garden at Canonmills. According to Loudon, the famous landscape designer, it was the richest urban garden in the country. This engaging book contains a wealth of historically valuable observations and also an insight into Edinburgh's scientific scene in the early 19th century. Patrick Neill is revealed as one the most interesting Scotsmen of the 19th century in terms of the variety of enterprises he fostered and the friendships he enjoyed with so many natural scientists of his day.

This very readable book will be of especial appeal to anyone interested in the history of horticulture, botany, plants, travel and historical biographies.

'I was particularly fascinated by the section on Neill's 1813 report on Scottish gardens and orchards. ... It contains all kinds of historical gems.' Scotsman Magazine

'Patrick Neill devoted his life to writing, natural history, horticulture and civic duties. ... A fascinating biography of a little-known pioneer.' The Scots Magazine

‘...excellent book describes Neill’s unique place in Scottish horticulture as a founder member and first secretary of ‘The Caley’ (The Royal Caledonian Horticultural Society). ... There are detailed accounts of Neill’s friends and acquaintances and precise itineraries of his travels in Scotland, France and the Low Countries. This informative contribution to the history of Scottish horticulture...’ HISTORIC GARDENS  Review