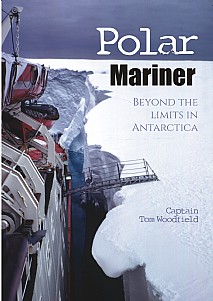 Beyond the Limits in Antarctica

This is an account of polar exploration, seamanship and human endeavour that is rarely found in this modern age and I am sure you will enjoy reading it. Extract from Foreword by HRH The Princess Royal

Captain Woodfield made 20 seasonal voyages to the Antarctic on three research ships between 1955 and 1974. Starting as a Junior Deck Officer he worked for The Falkland Islands Dependencies Survey which in 1964 became the British Antarctic Survey. He played a paramount role in the gradual change from using under-powered and poorly-equipped ships to the professionally-managed and sophisticated vessels of his last command.

The arts of exploration and survival during his early years in this majestic but unforgiving continent are described as attempts were made to establish research stations, support science, and survey in totally uncharted, ice-filled waters amidst often ferocious weather.  Dramatic stories are featured such as the near loss of a ship in pack ice, the stranding of another in hurricane force winds and the collapse of an ice-cliff onto the vessel.

The pioneers of Antarctic exploration, the area’s history, the hardships and incredible achievements of those original seafarers are described. Yet polar navigation during the author’s years was not without peril and the near loss in ice of his first ship, the RRS Shackleton, the demise of her Master, and his ill-judged replacement and consequent dramas are fully told.

After a voyage of enormous responsibility, aged just 25, he transferred to the RRS John Biscoe as Chief Officer under a fine seaman but difficult disciplinarian. The highs and lows of their relationship are told as are vivid descriptions of predicaments they overcame such as being blown ashore in hurricane force winds and beset and crushed in pack ice. The first ventures of the John Biscoe into the Weddell Sea are recounted with information on the nature and movement of ice, its interrelationship with weather, and the methods of navigation in ice before the age of satellites.

Appointed to command the RRS Bransfield,  he recounts her extraordinary maiden voyage when it was feared she would split in two. The battle with a horrendous storm at the end of his last voyage is fully described together with his final sentimental return to the Falklands.

This gripping book will be of great appeal to all those interested in exploration, adventure and natural history, maritime and naval history and anyone with a particular interest in the Antarctic.

‘...a detailed and fascinating account of the challenges, risks and rewards of working around the Great White Continent, and, of course, the Falkland Islands’. Penguin News

‘...a fascinating insight into an aspect of BAS’s activities... It certainly belongs amongst the best examples of Antarctic literature. ...contains much to excite any marine enthusiast, but it also has a much broader appeal. There are many high points in the book, but one is certainly Woodfield’s description of his last encounter with Antarctica, bringing the Bransfield safely across the Drake Passage through a whole series of savage storms which kept him on the bridge for more than three days, and could easily have destroyed the ship. This is one of the finest passages of maritime writing I have encountered, worthy of Herman Melville or Joseph Conrad at their very best’. BAS Club Newsletter

‘...this is a fascinating description of the “other side” of the Antarctic research and logistical support that we encountered... It is remarkably detailed...with plenty of tales to keep you turning the pages’. Cool Antarctica

‘...a dramatic story of true endeavour and exploration in the footsteps of the early pioneers. ...Woodfield plays a great part in bringing the red ships and their crews to prominence’. International Harbour Masters’ Association

‘...a well written book with innumerable references to the places, people, ships and events of the Antarctic continent and its adjacent waters’. Paul Ridgway, Ports and Ships

‘...provides an insight into an exclusive world which few have experienced. ...the illustrations provide a dramatic impression of the challenging, inhospitable and exciting ice scape of Antarctica... ...makes fascinating reading. ...a unique insight... ...I have no problem in fully recommending the book to all who have interests in ships, the Southern Oceans and polar expeditions.’ South West Soundings

‘One of the most interesting books by a seafarer seen in recent years...’ IFSMA Newsletter

‘Well-written and beautifully illustrated...will undoubtedly be hooked from the first page with its atmospheric account of arrival in Stanley Harbour. ...this book should be required reading for any seaman or surveyor heading for the Southern Ocean. This is indeed an adventure story, full of exciting incident and colourful characters. ...this important book’. Soundings

'One of the most interesting books to be received...' SeaGull

‘This book is more than a good read, it is an education’. Warships

‘...written in an engaging style but with considerable detail. ...richly illustrated... ...is well-written and illustrated. It has an engaging mixture of the nautical and the personal...with added doses of history, science and politics. South Georgia Association Newsletter

‘The events the explorers experienced were riveting... I strongly recommend the book, it has given us a new understanding of an amazing territory’. John H H Bradbury, C.B.E.

‘...Capt Woodfield beautifully describes the voyages he undertook... Across 13 detailed and immersive chapters he captures and entwines the progress of his career...with the untouched landscapes that opened up before him. Capt Woodfield’s unparalleled experiences give his first-person account of his travels south an engaging angle on what is a fine example of nautical storytelling’. Nautilus Telegraph

‘...this wonderful book which tells a tale of human endeavour which is rarely seen today. ... The book tells dramatic tales, such as the near loss of a ship in pack ice, the stranding of another in hurricane force winds and the collapse of an ice-cliff onto the vessel’. Burnley Express

‘… is extremely detailed, with personal anecdotes and revelations coming second to observations on history, flora, fauna, geology and, of course, the ever-changing and often dangerous weather, with the awe-inspiring icebergs… a journal of a different time in British maritime history… it is the sheer, unending beauty of the landscape – and the endless charm of the wildlife – that shines through’ The Historian

‘Much has been written of polar exploration but little exists of the mariner in the polar research ships. Here Captain Tom Woodfield – Polar Medallist and Elder Brother of Trinity House – plays a pivotal role in bringing the red ships and their crews to prominence.’ Flash Journal