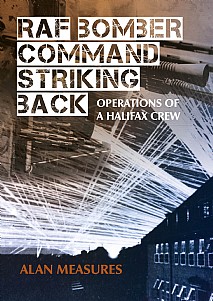 Operations of a Halifax Crew

In the early hours of 26th June 1942, six airmen from 102 Squadron return from Bremen in their Halifax, Q for Queenie, having taken part in the third Thousand Bomber Raid. These airmen formed a truly international crew, each one having an interesting back story that had led to their being together, including Len Starbuck, the Wireless Operator and Air Gunner on his 26th operation who is close to the end of his tour.

As operations continue, events on the squadron are recounted such as the inevitable toll of losses. German defences develop from uncoordinated concentrations around major towns and cities into a coherent barrier known as the Kammhuber Line. More new crewmen arrive on the squadron as the year progresses and with the arrival of winter, the ageing Whitley is phased out, replaced by the Halifax.

As the squadron became familiar with the Halifax, they exchanged six of their new aircraft for six from 35 Squadron who were about to mount an attack on the Tirpitz in a fjord near Drontheim. These aircraft were equipped with the revolutionary new navigational aid known as GEE, which was of no use to crews flying to Norway, but suddenly gave 102 Squadron an accurate blind-bombing capability they had not previously enjoyed.

On 25 May 1942, American air gunner Jack Fernie arrived on the squadron. Five days later he was on his first operation, caught up in the demand for maximum effort to support the first of Arthur Harris’ Thousand Bomber Raids to Cologne who believed that Bomber Command could win the war from the air.

Two days later, 102 Squadron again provided maximum effort for another massed attack on Essen, followed three weeks later by the third and final Thousand Bomber Raid to Bremen. Beginning the journey home at the tail end of the bomber stream, a night fighter was guided to an intercept position by a ground-based radar station that resulted in a fight to the death. This is an incisive look at the RAF’s bombing campaign during 1941–42 through the prism of a multinational crew which faced mounting risks from an increasingly organised and integrated German air defence capability.

This will be of immense appeal to anyone interested in recent military and aviation history, the RAF and WWII in particular.

'As sometimes occurs when a writer begins researching a book... the subject expanded into something greater, more involved and more interesting... presents a vivid day-to-day record of what it was like for the men who risked their lives night after night over enemy territory during the early phase of Britain's bomber offensive’. Aviation History

'...this highly detailed record of 102 Squadron... is dense in operational technical detail overlaid with the personal stories of 102 Squadron members and the tragedy of war and losses'. Australian Naval Institute