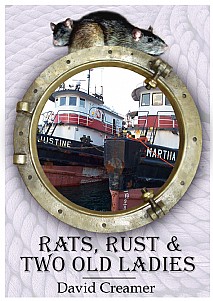 Delivering two 38-year-old Mississippi river tugboats halfway around the world from Bahrain to Trinidad would not be every ship master's dream employment. However, for Captain David Creamer, the seven-week voyage of the Justine and Martha was not only unique, but a memorable experience he was unlikely ever to forget or repeat.

As the author relates the day-to-day problems that the twelve crewmen encountered while living onboard, the reader is drawn into their world. The discovery of a plague of rats, steering problems, running out of fresh water and running aground in the middle of Sitra port, Bahrain are just some of the difficulties the two old boats encountered on their way to the Caribbean. Rusty water, fuel oil in a toilet, and a fire onboard in the Gulf of Suez were some of the setbacks experienced on the first leg of the voyage.

Designed principally for river work and not as ocean-going or deep-sea vessels, the hapless Justine and Martha encountered a short but violent Mediteranean storm on the passage from Port Said to Malta rendering conditions onboard extremely uncomfortable. On the leg of the journey from Malta to Trinidad, they hit more bad weather, partially flooding the Martha. It also became apparent that the fuel taken onboard by both vessels was biologically contaminated. Forced to stop at Gibraltar to clean the fuel tanks, the author and Chief Engineer visited Nerja in Spain, which coincided with the start of the Mardi Gras.

Although blessed with good weather for their crossing of the Atlantic, this epic voyage almost ended in disaster just a few meters from the final destination. An explosion from the engine-room, followed by a high-pitched mechanical whining, signalled the end of both engines, leaving the Justine to drift helplessly towards the jagged edges of a ramshackle concrete pier...

This humorous and unforgettable adventure story will be of enormous appeal to anyone interested in real-life stories, maritime tales, all armchair sailors and anyone looking for an engrossing read.

'For anyone familiar with 1960s era tugs... ...this nicely illustrated book will bring back fond memories'. Professional Mariner

'...this excellent and entertaining book. ...the author turns the experience into a book which is both amusing and page-turning. The reader can hardly wait for the next disaster! ... To find out what other challenges they faced, you will just have to buy the book. We are sure you will enjoy it. ...you are in for a real treat. Highly recommended.' International Tugmasters Association

'...this wonderful account... It is an excellent, mirth-provoking and memorable book...' The Little Ship

'Whether you are a salty dog or a cruise-ship lizard, you will enjoy this warts-and-all account of a modern life on the ocean wave.' Soltalk

'Creamer tells a good yarn well, such that his book would make an entertaining read for anybody, not only Old Salts with natural interest in nautical old ladies.' Nautilus UK Telegraph

'...In some ways a "Dad's Navy" adventure, it was an unusual but unforgettable ship delivery. ... Nevertheless, ingenuity, imagination or determination, or a combination of the three, prevailed'. Work Boat World

'...Creamer wrote a superb book - charmingly erudite yet easy reading and filled with history, insights, humour, a most-happy mix of details and generalities, and enough technical details so the tug-oriented reader knows what is really happening. The book gets my highest recommendation'. TugBitts

“Thank you for your help, particularly when Amazon let me down! ”
Joe, UK
“The book arrived on Saturday so earlier than you expected...Thank you very much for your help and I will definitely recommend you and your company. ”
Chris, UK
“... book came immediately, many thanks. ”
T.F, UK
Dunbeath, Caithness, Scotland KW6 6EG, UK T: +44(0)1593 731 333 E: info@whittlespublishing.com