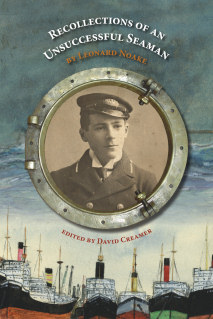 Recollections of an Unsuccessful Seaman

Born in 1887, George Leonard Noake joined the nautical training establishment, HMS Conway, in 1903. He then served an apprenticeship at sea until 1908 when his detailed memoirs commence, sailing as a second officer in the European/West African trade. After going ashore to work on a farm between 1913 and 1915, he returned to the mercantile marine in 1915 during the First World War to sail in a number of ships carrying horses, grain and coal. He survived not only being torpedoed in the English Channel, but also making 112 trips between England and Europe on a ship carrying war materials. Subsequently joining one of the largest tankers in the world, he endured a hazardous passage without a naval escort through the Channel to Rosyth to deliver safely the precious oil cargo before hostilities ended. The narrative of his wartime experiences is both harrowing and humorous.

The tanker continued to trade in peacetime between Mexico and South America before eventually returning to Hull, where he signed-off to see his family after being away for seven months. During war reparations he travelled to the East as a passenger, sailing as second officer on board a German vessel bound for Europe, where the Depression after the war gave him no hope for further seagoing employment. Borrowing money from a relative in 1921 he bought into a farm before becoming a haulage contractor. On the verge of bankruptcy in 1923, he escaped his creditors by joining a ship bound for Australia as a quartermaster. Luck was on his side and upon his return home he became master of a ‘Glasgow Puffer’ that had been converted to carry oil. He remained in the employ of the National Benzole Company to take command of three coastal tankers before accepting work as a chief officer on a ship trading in the Mediterranean. His seagoing career as a chief officer ended in 1927 when he was diagnosed with tuberculosis.

Readers of this poignant portrayal of life in the 1900s, not only at sea but also ashore, will be thoroughly entertained and moved by the author’s experiences and humour. Leonard Noake was undoubtedly a true character, one who enjoyed more than a tipple or two, a strong supporter of the fledgling unions and an unrelenting critic of shipping magnates and their shareholders. The last chapter of the book has been published without correction or editing allowing readers to make their own judgement of Len, his heartfelt style of writing and passionately-held beliefs.

This will appeal to everyone with an interest in sailing, ships and shipping, maritime history and memoirs.

‘Readers of this poignant portrayal of life at sea and ashore in the first part of the 20th century will be both entertained and moved. What shines through the pages is his constant ‘can do’ attitude and humour. A totally fascinating story of seafaring one hundred years ago with 30 pages of watercolour sketches and photographs’. The Cadet

BOOK OF THE MONTH

‘...it is a true unpretentious insight into the life in the mercantile marine some 90 years ago and has been magnificently edited by his great-nephew, David Creamer. Sometimes harrowing, but often humorous, this is a true gem and a poignant portrayal of life at sea and ashore in the 1900s’. Sea Breezes

‘Penned with warmth and humour, this is an engaging tale of one of the genuine war heroes of the age – one of those unknown seamen who signed for voyage after voyage into war torn seas to quite literally save Britain’. Julian Stockwin

‘Readers of this poignant portrayal of life in the first quarter of the 20th century, not only at sea but also ashore, will be thoroughly entertained and moved by the author’s experience and humour. Here is an amazing collection of a seafarer’s tales. …is a valuable contribution to the literature of the British Mercantile Marine. In particular it is one of the best of its type and a valuable link with our forefathers’ seafaring days: 1903-1927’. Paul Ridgway, Africa Ports & Ships

‘BOOK OF THE MONTH! A vivid Voice from our past. His fascinating accounts of serving onboard a remarkable range of vessels in war, peace and the Great Depression years contain many parallels with the present day… The book includes a wonderful selection of photographs, paintings and drawings he made during his time at sea. A kind of oral history, it all adds up to a rare, powerful and very direct account of the often grim realities of seagoing life a century ago’. Telegraph, Nautilus International

‘The narrative of his wartime experiences is both harrowing and humorous. The rest of life is covered in a well written manner. …a great insight into life at sea in the early part of the 20th century. This is a very good book and I would very highly recommend it to our readers’. Shipping Today and Yesterday

‘…an amazing collection of a seafarer’s tales. Recollections of an Unsuccessful Seaman is a valuable contribution to the literature of the British Mercantile Marine’. IFSMA Newsletter

‘…it was fascinating to read an extraordinary book…that offers a more intimate picture of the merchant seaman’s war. He paints fine word pictures of life at the rough end of the merchant service, as an officer on horse-transports bringing remounts across the Atlantic to the front in France. His wit, laconic attitude and a cheerful demeanour shine through this book, which really does shine a light on merchant seafaring at this traumatic time. Along with the heroism of the combatants, we should remember the merchant mariners, the Armistice Day’. Lloyd’s List

‘…record a world now long since lost in the mists of time. The writer of the notebooks and diaries had a very keen eye for detail’. In Depth

'...I was pleasantly surprised. This is not just another set of recollections and sea-stories, but a carefully selected collection of autobiographical experiences...is definitely to be commended: to the casual reader interested in maritime history...to the maritime historian...an entertaining evening read, it deserves to be read as a serious and critical account'. The Northern Mariner