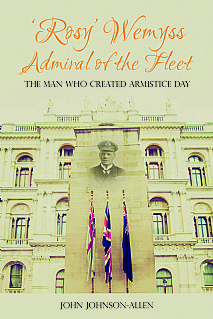 'Rosy' Wemyss, Admiral of the Fleet

The Man who Created Armistice Day

Rosslyn Wemyss’ life and career was both fascinating and brilliant – a most distinguished admiral who is very little known.  As the Allied Naval Representative at the Armistice negotiations on 11th November, 1918, he left an indelible mark on the life of this country when he was responsible, with Marshal Foch, for the creation of Armistice Day. The negotiations took place in a railway carriage at Compiègne in France when the decision was made at 5.30 am to cease hostilities on land, in the air and sea at 11am on that day.

One of the most illustrious of Scottish admirals, he was a member of the Clan Wemyss, whose ancestral seat is Wemyss Castle in Fife, overlooking the Firth of Forth. Rosslyn joined the Navy at the age of 13 in 1877, at the same time as Prince George, the younger son of the Prince of Wales, they became lifelong friends. After they left Dartmouth they joined their first ship together and sailed around the world for the next two years. In his early career, this friendship found him posted to serve on two ships for Royal Tours abroad and on two of the Royal Yachts.

In 1915, by then a Rear Admiral, he was sent to create a naval base at Mudros, to serve the Gallipoli campaign and was in command of the landings and then the evacuation of all the troops. The evacuation was so successful that only one man was lost from the approximately 140,000 who were taken off the beaches. From there, he was sent to Port Said to command the East Indies and Red Sea Station. For the next 18 months, the main thrust of his command was supporting the Arab Revolt and helping T.E. Lawrence and the Arabs, under Emir Feisal, to oust the Turks from all the ports on the eastern shore of the Red Sea. Without his support, the Arab Revolt would have collapsed and the legend of Lawrence of Arabia would not have been created.

In 1917 he returned to the United Kingdom to become Deputy First Sea Lord, stepping up to the post of First Sea Lord at the end of the year. As First Sea Lord, he represented British naval interests at the Versailles Peace Conference.

Through Rosslyn’s rich archive of letters and reports and his own words, this book gives a wonderful insight into the life of a man who became one of the most popular and senior officers in the Royal Navy at the time, and who was known throughout the Navy as ‘Rosy’.

Readership: this will be of huge appeal to everyone interested in WWI, modern British naval and military history and also biographies.