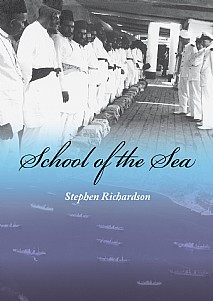 School of the Sea

...it is precisely the sort of record that is immensely important for enhancing our understanding of human affairs. ...The diary that has become a book reveals the light and shade of daily life, punctuated by terrifying moments. This was the real stuff of the war at sea and it has been tellingly captured here in this book.

Extract from the Foreword by Emeritus Professor Tony Lane, former Director of the Seafarers International Research Centre, the University of Cardiff, Wales

Based on his daily diary entries that provide a vivid and accurate picture of events, the author candidly recounts his development as a merchant mariner from his early years when he served his apprenticeship from 1937-41 on Elysia, built in 1908, a passenger ship on the India run. For the remainder of the Second World War, he served as an officer on cargo ships, leaving the sea with the qualification of Master Mariner soon after a return to peacetime.

At sea the war news is relayed in bits and pieces, feeding the underlying tension that keeps rising to the surface. Daily life is punctuated by terrifying episodes such as seeing ships sunk in convoy or hearing bombs drop beside the ship when in port during heavy air raids and the author also relates the horrific experience of being torpedoed. The extremes of nature that all on board had to contend with - winter storms on the North Atlantic; navigating in convoy through floe ice and avoiding icebergs; fog and the ever-present danger of collision; the extreme heat experienced in the Red Sea and Persian Gulf, without air conditioning - are all accurately described. He also relates the problems encountered when sailing on worn-out ships that would normally have been scrapped had it not been for the war, and as a consequence experiencing leaks, engine trouble and bursts of flame spouting from the funnel in areas where submarines were operating!

There are glimpses of the author's moods and thoughts, sometimes funny, sometimes poignant and sometimes romantic. He displays a droll sense of humour and there are interesting philosophical comments dotted throughout the book.

School of the Sea is a treasure house of unusual information, the kind not usually included in history books. It's personal, vivid, and entertaining and contains some wonderful descriptions of the dramas and mundane routines of shipboard society; stays in foreign ports; when on leave and the long sequestered life at sea. So much is missing from some existing maritime literature on WWII, where the focus is mainly on danger, excitement and death - this book, like no other, captures every dimension of daily life at sea and in port.

This well-written and very readable book will be a delight for all maritime enthusiasts and those with Merchant Navy connections. It will also appeal to anyone looking for a good read and those who enjoy autobiographies.

‘...a gem beyond price... his ability to convey his experience in vivid and eminently readable prose. Reading his book was a great privilege, and I cannot imagine that anyone with an interest in twentieth-century shipping, maritime ethnography, or merchant service during World War II would not want to own it’. International Journal of Maritime History

'...tells the story in a very personal and moving way of the life of a Merchant Seaman from a 16 year old Indenturede Apprentice in 1937 through to Master Mariner in 1964. ...vividly portrays a style of life and on the job training... ... The style of writing is unique... ...he is a natural and gifted writer.' Royal Naval Sailing Association Journal

'...Stephen's diaries are highly valued by experts not simply as a personal data but as historical records. ... ...this English seafarer's personal diaries in World War II are full of historical values. ...it should be read by people. ...will be an excellent textbook for anyonewho has never been to sea or who wants to go to sea.' Kaiun

'I recommend this book and wish that every member of the public had the chance to read it so that they too could appreciate our Merchant Navy.' Full Ahead