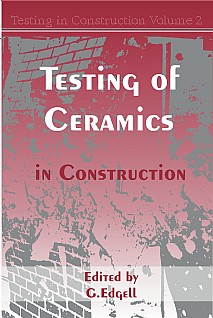 Testing in Ceramics in Construction

A comprehensive guide on the testing of the main ceramic elements used in the construction industry. Standard tests on fundamental products such as bricks, tiles and pipes are described and how these translate into practical procedures. The majority of authors have been involved in the drafting of Europe-wide standards, resulting in authoritative statements about the choice of test procedures, the state of the art, level of compromise and areas where no compromise is possible. This is a thorough treatment of European practice which finds acceptance worldwide.

Chapters covering larger elements such as walls, full scale tests, as well as model and accelerated testing, are included. Tests concentrate mainly on new products or structures and techniques for dealing with the performance and condition of existing structures are included. Codes and Standards by which brick masonry is designed are described. The future role of test method development using IT is discussed with its associated potential benefits.

Consulting engineers and designers, civil and structural engineers, manufacturers, contractors and testing houses on the international scene. It will also form a useful reference for architects, chartered surveyors and students in all these disciplines.