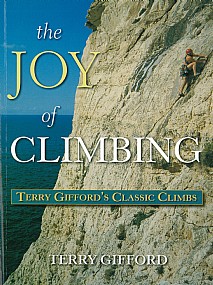 The Joy of Climbing

The Joy of Climbing is the result of a search through Britain, Europe and America for the esoteric gems at the easier end of climbing. This special selection demonstrates the sheer fun and enjoyment of climbing. The articles have been especially chosen to provide a stimulating but achievable challenge, whether on a climb itself or appreciating the moves from the comfort of an armchair. In his writing, Terry Gifford adopts a variety of styles, resulting in a blend that enhances the dramatic nature of the subject and provides the reader with both the lyrical and the unexpected.

As well as climbers, mountaineers and hill-walkers, this book will appeal to those who appreciate and have an interest in the environment and natural world.

'...The pages of this book are filled with tales of climbing as it is - climbing as experienced by most devoted British climbers, the writing is of an extremely high quality...
...Reading the essays, there is something unmistakeably nostalgic flowing from the pages, it takes the reader to the place where climbing is more than movement, finger-strength and the modern approach. This is a book about people and reminds us that there's more to this climbing game than climbing. ...you will appreciate these beautifully written, honest accounts on what climbing was, and still is'. planetfear.com

'...Covered are easier climbs in the UK, Europe and the States, with an excellent section on the Lake District with classics such as Corvus and Cam Crag Ridge, one of the popular scrambling destinations... Each route tells a story, so this is great armchair reading before stimulating you to head off to the crag. The book also contains some great pictures to stir your imagtination and plan your moves...' Lakeland Walker