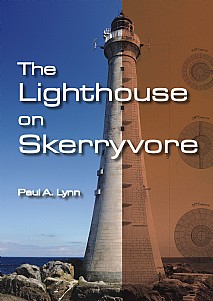 The Lighthouse on Skerryvore

Perched on an isolated rock in the Scottish Hebrides, this is a fascinating account of Skerryvore, ‘the most graceful lighthouse in the world’, and the great Victorian engineer who designed and built it. At a height of 48m (156 feet), it is the tallest lighthouse in Scotland.

The story of the Skerryvore lighthouse and its creator, Alan Stevenson, is remarkable by any standards. Here was a man of exceptional intelligence and wide-ranging ability who overcame Herculean challenges over a six-year period to place a lighthouse on an isolated rock in the wild North Atlantic, 12 miles off the Hebridean island of Tiree. He was a brilliant and complex character, much loved by his family and those who knew him, but beset with self-doubt. His is a moving and truly amazing story just waiting to be told.

Reading Alan Stevenson’s 1848 Account of the Skerryvore Lighthouse, the author immersed himself in Skerryvore through the mind of its creator, using his background as a professional engineer to assess the state of knowledge at the time, and to learn all he could about its background, technical design, and the many trials and tribulations surrounding the lighthouse’s construction.

This highly readable book, illustrated in full colour with beautiful old maps, engravings and photographs, also contains introductory material about Eddystone and Bell Rock Lighthouses that greatly influenced Alan Stevenson in his design and construction of Skerryvore. Snippets of personal reminiscences and fascinating historical perspectives on the West Highlands give readers a wider view, encouraging them to visit Tiree.


Part II: Skerryvore
To the Isle of Tiree
Great preparations
‘On the construction of lighthouse towers’
1838: A faltering start
1839: Solid progress
1840: Stones to Skerryvore
1841: Onward and upward
1842: Topping out
1843: Endgame
Engineer, scholar, artist.

‘...he explores, very readably, the challenges the Stevensons faced, and how he overcame them. Alan Stevenson is one of Scotland’s greatest engineers, sadly too little known. This is the story of his finest achievement, and a story well told’. Nautilus Telegraph

‘Lynn writes with a light hand, weaving descriptive prose with science, setting the construction of Skerryvore in natural and social-historical context. …a gem of a book that is more than just an account of the building of a massive stone tower on a treacherous ledge. …Lynn blends art and science, distilling the story of Skerryvore into a highly readable, engrossing chronicle’. The Lightkeeper

'His life and time, skills as an engineer and designer, personal strengths and weaknesses are assessed and presented... All is revealed in this fascinating book'. Scottish Island Explorer

‘…a thorough account of the building of the lighthouse as well as a discussion of Stevenson’s personal background and the personality behind this remarkable Victorian engineer. …the first in-depth discussion and explanation of the scientific principles involved in lighthouse design…Lynn’s descriptions of all the decisions made behind every detail of the building Skerryvore…thoroughly fascinating. I would recommend this book to anyone with an interest in lighthouses, maritime history and historical accounts of engineering achievements’. World Lighthouse Society Newsletter

‘The personality of Victorian engineer Alan Stevenson is also explored, as we are shown the skill and determination which was needed to bring this immensely challenging project to fruition’. Scottish Memories

‘…this publication is important. … I congratulate Paul Lynn on his articulate and skilful narration… …I found it a great read and have no hesitation in recommending it to the lighthouse aficionado as well as the casual reader! You will not be disappointed’.  www.bellrock.org.uk

'The story of the lighthouse, and of the man who built it, Alan Stevenson, is a fascinating one, and Paul A. Lynn tells that story in an informative and highly accessible way. ...a large number of excellent (and often also contemporary) maps and drawings and more recent photographs really helps bring the subject matter to life. ...a thoroughly worthwhile addition... ...takes a rounded view of two very underappreciated subjects'. Undiscovered Scotland