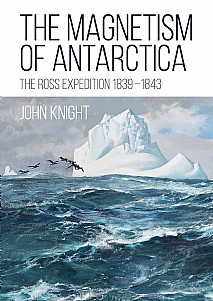 The Magnetism of Antarctica

• Includes stories about the crew members

This under-documented expedition was a pivotal moment in the annals of polar exploration and was the starting point, in historical terms, of revealing the great unknown continent of Antarctica. It was the first time in nearly 70 years since Captain James Cook had circumnavigated Antarctica, that a Royal Naval voyage of discovery had ventured so far South. They set a new ‘furthest south’ record in the process beating the one set up by James Weddell in a whaling ship in 1823.

The expedition set sail from Greenwich in 1839. It consisted of two wooden sailing ships commanded by Captain James Clark Ross and Commander Francis Crozier. The ships were manned exclusively by Royal Naval personnel and each ship had a complement of 64 men and officers. Their primary task was of a scientific nature to study the Earth’s magnetic field and build up a set of results that could provide a greater understanding of the effects of magnetism on compasses and their use in navigating the world’s oceans. This voyage had a set of planned targets and all were accomplished. In the process a vast amount of scientific information was collected.

Many exotic places were visited during the voyage amongst them Madeira, St. Helena, Cape Town, Kerguelen Island, New Zealand, Australia and the Falkland Islands but the pinnacle was the discovery of the Ross Sea, the Ross Ice Shelf and the mighty volcanoes of Erebus and Terror (named after the two ships). The crews experienced the dangers of navigating in ice-strewn waters and narrowly escaping being crushed by icebergs. Illness was kept at bay although several lives were lost due to accidents.

It would be another 60 years before the scenes of their greatest discoveries were visited again and then the Golden Age of Discovery was ushered in with the likes of Scott, Shackleton and Amundsen.

Contents: Part 1 – The Expedition. In the Beginning; Targets and instructions; James Clark Ross and Francis Crozier; Setting sail to Madeira and the Atlantic Islands; Cape Town and beyond; Next stop – Hobart, Tasmania; First taste of the ice; Amazing discoveries and wonders to behold; Turning North; South again to the Great Ice Barrier; Impending Disaster; Wild cattle hunt and a third winter away; Return to the Antarctic. Part 2 – The sailors’ stories. Part 3 – The sailors’ ships

All those interested in exploration, adventure and natural history, maritime and naval history and anyone with a particular interest in the Antarctic will find this a hugely enjoyable and informative read.

The Arctic
Per Michelsen, Richard Sale