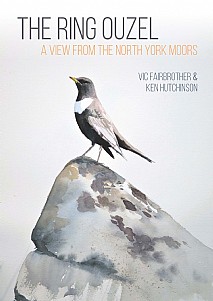 A View from the North York Moors

...This is an invaluable book on a very important, but relatively little-known, species by two remarkably enthusiastic fieldworkers in a part of the country renowned for its beauty.  I hope you enjoy reading it as much as I have. Extract from Foreword by Chris Rollie, RSPB Ring Ouzel Plan Manager, Chair of the UK Ring Ouzel Study Group

Using vivid extracts from field notebooks and profusely illustrated with photographs as well as paintings and sketches by wildlife artist Jonathan Pomroy, the reader is transported to the beautiful North York Moors National Park. We can share in the excitement as the first Ring Ouzels of the year return from their winter quarters in North Africa, witness their courtship displays, the establishment of territories and the female ouzel painstakingly building her nest and laying eggs. This is followed by the monitoring of the hatching and fledging of chicks and the levels of predation – noted in order better to understand the productivity and sustainability of this vulnerable and isolated population.

To hear the song of the Ring Ouzel carrying for a surprising distance across the high moorland in the early morning is one of the many delights of upland Britain. The authors have recorded and analysed both simple and complex songs in their study area and, following comparison with recordings from Scotland, Derbyshire and the Yorkshire Dales, have confirmed the suspected presence of local dialects.

Crucially this book is much more than a remarkable record of twenty years’ fieldwork as it builds on earlier research elsewhere and relates local findings to the results of other current studies in England, Wales and Scotland. The contraction in distribution and number of Ring Ouzels breeding in Britain, the work of the Ring Ouzel Study Group, the introduction of conservation measures and the potential impact of climate change are all described. Attention is drawn to the first indications of Ring Ouzel decline in Switzerland.

As a migrant, the Ring Ouzel faces additional pressures and problems on passage and conditions in their wintering areas in the Atlas Mountains of Morocco are described. The importance of Britain as a stop-over and refuelling area for Fennoscandian birds on passage in Spring and Autumn is stressed. There is still much to learn and the early attempts to track Ring Ouzels on migration from Scotland to North Africa and back are described. This milestone publication brings the Ring Ouzel into sharp focus for the first time.

This will be of special interest to birders and will also appeal to everyone with an interest in wildlife and the natural world.

...It is superbly produced and illustrated, and is a great showcase for Ken and Vic’s dedicated fieldwork... a real benchmark publication and key reference... The watercolours are a masterstroke and really round the book off beautifully. ... I cannot recommend the book highly enough... Chris Rollie, RSPB Ring Ouzel Plan Manager

...this is a beautifully illustrated book ... and peppered with superb watercolours. ... The well written prose is often full of observation so succinctly and poetically put across...  Any birder will enjoy this book, and anyone with a serious interest in Ring Ouzels will need to refer to it often. FatBirder

'...a welcome addition. ...such extensive monitoring of a little-known species is always enriching'. ORNITHOS

...covers every aspect of the life of a ring ouzel in fine detail... is extremely well illustrated with photos and sketches of the bird itself, nests and nest sites, plus helpful graphs and diagrams. The Ring Ouzel is a high-quality ornithologist's book, as well as being a fascinating book for a reader with a generalist interest in birds. Alan Stewart, Wildlife Detective blog

...a fascinating read... is not only a great read but plays an important role in keeping records of the bird and the potential impact climate change can have on them.... A brilliant book for not only bird watchers, but for wildlife and nature lovers too. Rebecca Hay, UK Travel and Features Writer

‘…is a thorough compendium of two decades worth of careful field study… it is also a love letter to the landscapes and wildlife of Yorkshire… this is a beautifully presented book, a treasure trove of knowledge and a great examination of Ring Ouzel ecology…will be a useful touchstone for the future monitoring and conservation of one of our most vulnerable thrushes’. BTO News

'Lots of photos, along with some beautiful paintings, accompany years' worth of observations and data. Anyone remotely interested in this cool-looking thrush or this area of Britain should enjoy this'. The Birder's Library

'This new and comprehensive study provides a rare and fascinating insight into the lives of one of our most vulnerable upland birds... The book is beautifully complemented by the paintings and sketches of wildlife artist Jonathan Pomroy.  The Dalesman

‘…is the first monograph on this species since Ian Appleyard’s book… in 1994… A Vast amount of information is set out… Many colour photos add to the book’s appeal, and it is a great addition to the book case’.  Bird Watching Magazine

'...provides a fascinating insight into the life of the Ring Ouzel in one of its last remaining strongholds in the UK... I thoroughly recommend it to all interested in our uplands and the species which live in these special places'. Scottish Birds

'Since receiving my copy of the book I have hardly put it down. It is a great showcase for Ken and Vic's dedicated fieldwork, the species and the area - a real benchmark publication and key reference for anyone interested in ring ouzels. The watercolours are a masterstroke. I cannot recommend the book highly enough!' Chris Rollie, Chair of the UK Ring Ouzel Study Group

'This book, based on a 20-year local study by two amateur ornithologists, really packs a punch. With masses of original information and observations, it impressed the judges by its professional presentation and readability... This informative and attractive book sets the benchmark for future species studies of this nature'. British Birds

'...this account of the 'moorland Blackbird' in one part of its British breeding range is a really good read... and a great credit to the two authors'.  British Birds

'Fascinating new book explores life of much-loved bird of the British uplands...an important new book... As well as studying this fascinating member of the thrush family for the past couple of decades, the duo have also pored through countless historic publications to enrich their research... This highly readable book'. Lincs Bird Club

'These two took this dedication to citizen science even farther. Their book details a lot of natural history, including some never-before-recorded courtship behaviours. But even more important, this information can help conservationists understand the birds' decline... conveys the joys of observation, of hiking and hiding in wild places, of making discovery'. Cool Green Science

'The book, as with the study itself, is clearly a labour of love... a well-produced and enjoyable account'. British Birds

'I constantly felt as though I was actually with Vic and Ken on the moors, experiencing their observations first-hand'... it could, because of the wealth of information it contains, be regarded as a monograph on the Ring Ouzel'. Teesmouth Bird Club

'...one of the most detailed and thorough single-species monographs out there. They cover every aspect of this enigmatic and elusive thrush's life:... This is a fascinating book, written by two dedicated naturalists who are amateurs in the best sense of the word, and deserves to be widely read'. American Birding Association

'This very interesting and fascinating volume... can be used as reference or just purely for a good read... a professional, well-presented and simple to comprehend attitude, comprehensively covering all areas of interest throughout'. Cambrian Ornithological Society

'...a remarkable monograph documenting their two decades of fieldwork... The book commemorates their dedication and perseverance in extraordinary detail'. Natural Areas Journal

'this well-produced book, which is hugely enhanced by delightful illustrations by artists Jonathan Pomroy, who beautifully captures the animated nature of his subject...this fine monograph, which can take pride in its place in the long tradition of studies of a single species of bird.' American Birding Association

' once you get that thirst for birding knowledge, you can never know enough. we all owe the likes of Ken and Vic a big thank you for doing the hard work for us.' Birdwatching