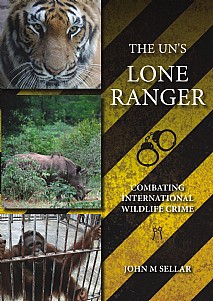 ' ...John blazed a trail for the CITES Secretariat in the fight against wildlife crime. … John’s reflections warrant our close attention. … It will undoubtedly be of great interest to anyone with a passion for wildlife...' Extract from Foreword by John E. Scanlon AM, Secretary-General, CITES

Illegal trade in wildlife is now recognized as one of the most significant criminal activities in the world, bringing billions of dollars in illicit profits to organized crime groups and networks, which are acknowledged to control much of this trafficking. Until 2011, John M. Sellar was the most senior law enforcement official operating transnationally to combat these activities, drawing upon his previous 24 years of experience in the Scottish Police Force investigating serious crime. Following his secondment as Chief of Enforcement to the Convention on International Trade in Endangered Species (CITES), he was labelled by the media as ‘The UN’s Lone Ranger’. His duties took him to more than 60 countries, involving 2 million kilometres of travel over the course of 14 years.

His book describes why organized crime has turned to robbing nations, especially in the developing world, of their animals and plants and how this is bringing several species to the brink of extinction. It illustrates, in words and images, how criminal networks recruit, equip and direct poachers and wildlife contraband couriers; arrange the smuggling of species and products, often involving transportation across many borders and several continents; use bribery and violence against law enforcement personnel; and the nature of the markets in which illegal-origin wildlife is being consumed. Separate chapters examine particular wildlife crime-types, such as the poaching of elephants and rhinos, the hugely profitable illicit trade in caviar, and the demand for the skins and bones of tigers which has almost eradicated them.

But Sellar, once described as ‘the world’s leading authority on wildlife crime’, also reflects frankly, and sometimes critically, on his service as a UN official, the way in which national law enforcement bodies are reacting to these crimes and the support provided by international agencies. He identifies what he believes are significant gaps in the current responses and suggests ways in which they might be plugged. He recounts several of his incredible experiences; visiting anti-poaching officers on the roof of the world, the Tibetan Plateau, and bizarre late-night hospitality from KGB officers.

The UN’s Lone Ranger tells of law enforcement and diplomacy. It is also the first book, written from an international perspective, about a subject that warrants much greater attention, if the world’s most threatened species are to be safeguarded for future generations.

Becoming the UN's Lone Ranger, CITES, Conservation and Crime, Wildlife Crime and Organized Crime, Committing the crime; Manipulating people and circumstances; Corrupting, threatening and killing; The World-wide Wildlife Web and other marketing machinations; Spot the gangster; Wildlife crime and terrorism; The caviar criminals; Elephants and ivory; Tiger traffickers; Rhino racketeering; What might we do better? Riding off into the sunset; Annex; Official CITES Missions

It will be an engrossing and essential read for all who value the world’s wildlife and have a concern about wildlife conservation and preservation, eliminating abuse of and profiteering from the natural world. It will also be of huge appeal to wildlife professionals who have to implement and police conservation regulations and members/supporters of special interest groups and appeals for individual species.

'...Sellar blends a dry wit with hard-bitten experience to vividly illustrate the difficulties facing CITES in the coming years. ...deserves close attention from those with a keen interest in the CITES regime and the wider problems posed by environmental crime...' RECIEL

'The first value of this book is therefore to bring a much greater understanding of just how seriously we should address wildlife crime.  ...chapters will certainly grab your attention and raise your eyebrows. ...the story he tells is fascinating reading. ...his messages have significant reflections and deserve careful consideration. Given the current escalation in elephant and rhino poaching, this book could not have come at a more appropiate time. By reading it, we should have a better understanding about the scale of wildlife crime, its complexity and the desperate need to bringing the illegal decimation of the world's wildlife to a halt. I believe John's book contributes to that evalution'. SWARA

'...the dedication and enthusiasm of the author is never in doubt and exemplified by the many accounts of his incredible experiences. ... The long, excellent series of colour photographs tell their own story... ...a very welcome addition. This book about the illegal trade in wildlife is recommended to any general reader or anyone interested in wildlife and a concern for its future'. Ray Collier, Highland News Group

'...is about his time with the UN and describes why organised crime has turned to robbing nations of their natural resources and how this is bringing several species to the brink of extinction. ... This is an interesting book and a good read. It is very much a personal account...' Environment

'It is certainly recommended reading for persons who are familiar with and have a background understanding of the issues.' SULi News, Newsletter of the IUCN

'...a hard hitting look at the deplorable state of wildlife crime and exploitation globally and John is to be congratulated for a lifetime of work, often sruggling against corruption at the very highest level in many countries. ... I read this book cover to cover and found it to be captivating and astounding. For those interested in this little known aspect of criminal world-wide activity this is the work which will bring to light the reality and shocking truth of this global wildlife holocaust'. Police History Society Newsletter

'... He is an excellent storyteller... Sellar's book is a fascinating one, because there is a limited awareness of the nature and scale of wildlife trade... ...is a riveting read and I would highly recommend the book to anyone with even a passing interest in wildlife and animals.' Sanctuary Asia

'...this book is an eye-opener. The author's unique knowledge of international wildlife trade is set out in an easy-to-read style, with anecdotes drawing on his Scottish policing background. This is a book that should be read by everyone involved in - or even with an interest in - wildlife conservation. It should also flag up to the world the very real risk of imminent extinctions'. Wildlife Detective  The Blog of Alan Stewart

'...a very personal insight into John's assessment of the challenges faced and the promising opportunities that exist in the fight against wildlife crime.' Huntly Express

'John Sellar tells a good tale. This readable book is a memoir by the Scottish policeman who went on to spend 14 years as 'the UN's Lone Ranger'... ...found himself in some astonishing situations in far-flung corners of the world... Anyone seeking a better understanding of how criminals are driving endangered species towards extinction should read this book... ...an entertaining read, if enforcement agencies were to act on the recommendations therein, far fewer poachers and smugglers would go unpunished, and far more endangered species might survive'. Reviewed for BBC Wildlife by Ian Redmond OBE; Ambassador, UNEP Convention on Migratory Species; Chairman, Ape Alliance.