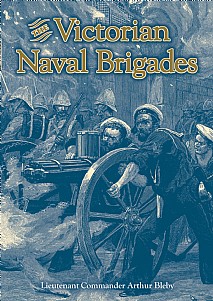 There is a view that, in Victorian times, whilst the Army was engaged in a series of wars, the Navy enjoyed a peaceful existence - however, this was not the case. Complemented by authentic engravings, this book relates in fascinating detail the significant role that was played by the Naval Brigades in eleven 'Wars of the Empire' from the period 1854 to 1900. A naval brigade was a body of seamen of Royal Marines drawn from their ships and landed for active service under the orders of an army commander after a somewhat basic training.

Today's reader will become aware of the harsh conditions and deprivations experienced during the British and French strike on Sevastopol, the main Russian naval base during the Crimean War. The terrible conditions experienced during the winter siege and the strength of the key characters, Lord Raglan and Captain William Peel, make a vivid impression. The author relates how the crew of HMS Shannon, commanded by Captain William Peel, were involved in the Relief of Lucknow during the Indian Mutiny in 1857 whilst during 1867-68, the Naval Brigades under the command of Lieutenant General Sir Robert Napier played a crucial role in rescuing the British Consul who had been held in chains for three years within land-locked Abyssinia.

This book provides authoritative and enlightening reading on details such as how the inexperienced seamen of the Naval Brigades fared on land, armed with a rifle and a cutlass-bayonet; the weaponry used by the Brigades including the Gatling gun; and the formidable characters of those who formed the Naval Brigades such as Major General W.C.F. Molyneux, who fought alongside the Naval Brigades in the Zulu War and later against Arabi Pasha in Egypt.

A book that is sure to be of great interest to anyone who enjoys military, naval and maritime history. It will also be of appeal to the general reader and anyone looking for a fascinating read about the time of the British Empire.

'This book is an important addition to British Naval history'. The Northern Mariner

'Commander Bleby has written a rattling good yarn of Victorian derring-do that will fascinate anyone who has Victorian naval ancestors.' Ancestors