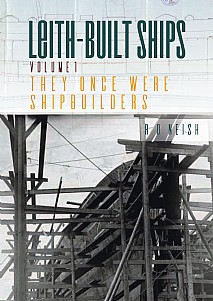 They Once Were Shipbuilders

Leith-Built Ships is a testimony to the skill of the men who built the ships and to the many men and women who may have sailed or served on them. This history is brought together in vol. I of a three-volume series about the almost-forgotten part that Leith played in our great maritime heritage and is the culmination of the author’s lifetime experience of shipbuilding.

Most people may well be aware of the part played by the great shipbuilding centres in the UK’s history but many may be unaware of the part played by the shipbuilders of Leith.  This port was once Scotland’s main port with many firsts to its name. Leith had begun building ships some 400 years before the great shipyards of the Clyde and these vessels reached all corners of the globe, touching many people’s lives. Some had sad histories while others took part in some of the great conflicts of the times; many were just ordinary working vessels that carried their crew safely through long working lives.

With a pedigree of shipbuilding second to none going back over 660 years of recorded history, the ships built at Leith deserve their place in history and this book begins the story.

'...an engrossing book that will have a lasting value...you'd expect this book to be superbly researched and knowledgeably written. It doesn't disappoint. It is also readily accessible to the non-expert...' Undiscovered Scotland

'This is an extremely well-researched book and I would highly recommend it to anyone with an interest in this area'. Shipping Today & Yesterday

'The narrative is filled with anecdotes and a warmth that can only come from someone with personal memories of the industry and it is a fitting homage to the shipbuilding heritage of Edinburgh, so often eclipsed by Glasgow'. Scotland

'Highly readable history of British shipbuilding’s golden age. ...a broad and engaging spread of social, economic and historical themes. ...a very readable history, providing an excellent mix of social and political context to the technical and industrial achievements of the Leith yards'. Nautilus Telegraph

'...the ships built at Leith deserve their place in history and this book, the first of a trilogy begins the story'. The Bosun's Chronicle

'...A valuable history is provided of the ships built at Leith from around 1850 until the end of the First World War detailing the yards and the famous ships they constructed, accompanied by tales of adventure, trades and inevitably fates'. Africa Ports and Ships

'This attractive, well produced, slim volume… has clearly been very well researched by Ron Neish… the book is very well illustrated throughout and strongly recommended as an interesting example of British shipbuilding'.  Scuttlebutt Magazine

'What is fascinating though is to read how shipbuilders had to learn to adapt to new skill requirements as the methods of building ships changed'. Arts Reviews Edinburgh

'a valuable history is provided of the ships built at Leith from around 1850 until the end of the first world war detailing the yards and the famous ships they constructed, accompanied by tales of adventure, trades and inevitably fates.' Paul Ridgway