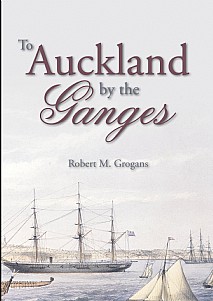 To Auckland by the Ganges

The Journal of a Sea Voyage to New Zealand in 1863

In 1863 there was only one method of travelling from Britain to the other side of the world by sailing ship, on a journey that could take up to four months, and when the vagaries of wind and weather could put travellers in peril during long voyages. The offer of grants of land in New Zealand was a means of enticing emigrants to the fledgling colony, particularly people who had a skill to offer.

One such emigrant was David Buchanan, a journalist and editor of several prominent Scottish newspapers, who opted for a new life in the hope that the health and fortunes of his family would improve. He travelled with his surviving son and three daughters, having lost his wife giving birth to their ninth child.

Using his journalistic skills, Buchanan maintained a daily journal of the voyage which was published twice-weekly in his former newspaper, the Glasgow Herald. His account blended accurate details of the vessel and its handling with anecdotal tales and experiences providing interesting snapshots of mid-nineteenth century life. His devotion to detail suggests a passenger's keen eye upon the operation and progress of the vessel by the ship's crew. Of especial interest is the description of daily life aboard a mid-19th century sailing ship, and the interaction between passengers and crew. The clear class distinction between cabin and steerage class passengers, as well as the many pitfalls and potential injuries to passengers and crew that are described make illuminating reading.

Upon reaching New Zealand Buchanan and his fellow passengers had stepped into the unrest of the Maori Wars, which were closely reported in British newspapers such as the Glasgow Herald. David Buchanan and his family may have settled and led a prosperous life but whatever befell him, he is due our gratification for providing an interesting and valued account of experiences on a voyage during the dominant era of sailing ships.

This vivid description of sea-going life in the 19th century will be of especial appeal to everyone interested in ships, shipping, maritime and social history, and travel. It may well be of particular interest to genealogists and family historians due to the many named persons and passengers that are included.

'In this interesting publication Robert Grogans has brought to light a serialised set of newspaper articles by David Buchanan chronicling his sea voyage to New Zealand, originally published in the Glasgow Herald in early 1864. Carefully footnoted and edited for a modern audience, Buchanan's lively account will no doubt be of interest to anyone researching the migration experience in the 1860s. ... A maritime historian would be fascinated by this account. ... Robert Grogans must be congratulated for bringing this very interesting shipboard diary to light and the book should be well utilised by maritime and family historians seeking an insight into the migration voyage in the 1860s.' Review of Scottish Culture

'...Robert Grogans has edited, streamlined and modernized the text, providing a short introduction, many useful endnotes, a helpful maritime glossary and a description of sail-handling. ...a useful primary source for migration historians interested in the sea passage itself, and for those seeking first-hand accounts of passenger travel and seafaring in the age of sail'. International Journal of Maritime History

'...his lively and intelligent account of the voyage of the Ganges, with 260 emigrants aboard, was written in the style to which his educated readers were accustomed. ...the rare perspective of a professional jounalist and revealed his intimate understanding of the life of people on board an emigrant passenger ship. ... David Buchanan and Robert M. Grogans have provided us with an interesting and valuable record of the experience of migration in this portrait of everyday life on board an emigrant ship during the age of sail.' The Northern Mariner/Le marin du nord

'...The result is an utterly fascinating book that should be regarded as essential reading for anyone interested in the story of Scotland. ... the insights gained from reading this book add a previously unseen dimension to the stories of so many Scots'. Undiscovered Scotland

'...this travelogue is a gentle reminder of an age when the other side of the globe was half a year's trek away. ...it's full of detail of travelling under sail. ...Buchanan's comments on his fellow passengers reveal a man with an eye for colour...' The Herald