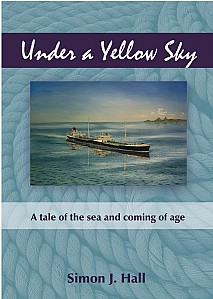 Under a Yellow Sky

A tale of the sea and coming of age

Simon Hall went to sea in search of a way of life that he believed was glamorous, adventurous and disciplined, a life where smartly-uniformed men ran ships in a tightly organised manner. At this time the British fleet was still one of the largest in the world and the Red Ensign a common sight in most large ports. In over three years as a Deck Cadet he explored this world and although he uncovered much of the magic of the sea, he also encountered brutality, exploitation, dizzying hard work and frightening bouts of violence.

From the rigidity of naval college to the heat and sweat of working as a deck-hand in the South China Sea, the book charts Simon's progress from a naïve and callow school-leaver to a strong young man. On that road he encountered a cast of people that were beyond his wildest imagination. He met the bad: sadists, bullies, madmen; and the sad: alcoholics, prostitutes, drug addicts. And sometimes people so good they diminished him.

The author tells of nights so cold the water froze on his hands; of days when the sun was so hot he could hear his skin sizzle and of times when the ship steamed through wild seas that rushed over the deck like boiling foam. With a thread of humour running throughout, he writes of the shipboard camaraderie and the wild jaunts ashore in exotic places. As he tramped around the backwaters of the world, he encountered a rarely-experienced side of life that at times became almost surreal, making this an extremely different travelogue.

This is an incisive and colourful commentary of men living and working together in extreme circumstances and a coming-of-age book like no other. Under a Yellow Sky shines a backward light on a world that has now disappeared.

A well-written book that will appeal to all who are interested in ships and shipping, modern and maritime history, and those who enjoy well-told travellers’ tales of fascinating people and places.

'...paints a vivid picture of the life of a cadet in the early 1970s from the time the author joins a rusty old tanker in Hamburg to the end of his apprenticeship. He doesn't shrink talking about the tough reality of life at sea. ...there is humour and what ultimately shrines through is the author's understanding of and his respect and love for the seafarer's way of life. ...a fascinating and often incisive commentary of men working together in tough demanding circumstances. Highly recommended'. Sea Breezes

'...a colourful memoir... As he tramped around the backwaters of the world he discovered the magic of the sea and encountered people from across the whole spectrum of human behaviour'. Julian Stockwin

'Simon Hall's new book, however, stands out from the crowd - being not only very well written, but also thoughtful and reflective. ... His fine writing style draws the reader in and captures the magic and chaos of foreign ports, the fear and exhilaration of working in a bosun's chair 80ft above a rolling deck, the Dickensian work of tank cleaning onboard an ageing tanker, and the deep camaraderie... ...vivid memories of his cadetship demonstrate clearly that deep and lasting personal impact of his sea training... His finely observed and well written book...' Nautilus Telegraph

'I always enjoy books about the golden era of the British Merchant Navy, and this is no exception. I would highly recommend it to our readers'. Shipping Today and Yesterday