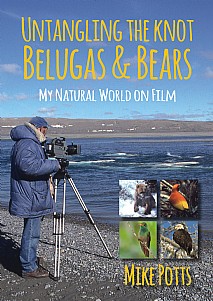 My Natural World on Film

The beginning of the author’s adventure with a camera – filming wildlife across the world for the BBC Natural History Unit and other major TV companies – began in 1978 when he joined the RSPB’s film unit.

Untangling the Knot gives an in-depth look into what is involved in capturing the sequences needed for a natural history film, using comprehensive diaries and over 200 photographs. Mike describes the stresses of international flying with 20 cases of film equipment, sometimes alone, to distant corners of the world. The hardships of living and working for weeks in remote regions, avoiding tropical diseases, the onslaught of forest insects, long hours of waiting from dawn to dusk, and of frustration and disappointment when the elements or circumstances conspired against him.

There are times of great elation too, when animal behaviour never seen before is captured on film. Working with top biologists and highly-experienced pilots was an essential partnership in understanding the subject to be filmed, often in remote regions where the challenge was reaching the subject in rainforest canopies, on remote islands or in featureless arctic tundra.

In a career spanning 35 years, several of the programmes in which he was involved have won major awards. He describes filming Attenborough in Paradise in New Guinea with Sir David Attenborough as a career highlight, where he filmed behaviour of Birds of Paradise that had never been seen before. His last programme, Jewelled Messengers was the fulfilment of an ambition to make the ultimate film on hummingbirds with producer Paul Reddish, using the latest high-speed, high-definition cameras, and which was shot mainly in Brazil and Ecuador.

The story concludes when he realizes his dream of visiting the Ross Sea region of the Antarctic. Mike considers himself lucky to have worked in so many spectacular regions of the world and this book enables readers to travel with him and share his incredible experiences.

This will appeal to naturalists, wildlife photographers and everyone with an interest in wildlife and the natural world.

'The book takes you around the world, with some amazing sightings and plenty of pictures of Mike’s work… Enjoy'.  Bird Watching Magazine

‘…gives a fantastic insight into the life of a wildlife cameraman, the extreme locations he has visited and the vast array of wildlife he has captured… What I relished most was his in-depth descriptions of all the wildlife he mentions and the often dramatic, and remarkable, scenery he encounters… There are many incredible stories to get your teeth into with this book… Both wildlife lovers and photographers will surely delight in reading these comprehensive tales… The stories are delightful and full of adventure. I really recommend this as a ‘must read’. Wild Planet Photo Magazine

'...takes the reader on an exciting and adventurous journey... The text is greatly enhanced by outstanding photographs... this outstanding book... provides a truly inspirational insight'. Cambrian News