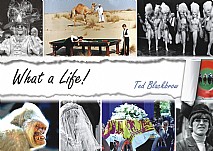 From his humble beginnings in London’s East End, Ted Blackbrow went on to become one of the UK’s greatest press photographers. Thrown out of a good grammar school at 15, Ted embarked on a career that would see him photograph members of the Royal Family, Enoch Powell, The Beatles, Sean Connery, Elton John and Mick Jagger, to name just a few!

Long before social media, his images were being shared all over the globe. His pictures of the Vietnamese refugees on the Sibonga were a widely-syndicated world exclusive, and what started as an ordinary day at Newmarket Racecourse resulted in an award-winning photograph that was syndicated across the world.  His shots of sports stars, both famous and infamous, are unique and often gained exclusives for The Daily Mail. Huge names such as Steve Redgrave, Tonya Harding, Linford Christie, Ben Johnson and Seve Ballesteros were among those captured by his camera.

A believer in the idea that no matter how good your equipment, you have to be in the right place at the right time to get the picture (or, as was often the case, the wrong place at the right time!), the author reveals how a mixture of cheek, boldness, and a large slice of luck enabled him to get some incredible images. What a Life! features some of the best of Ted’s photos, along with the entertaining, engaging and enlightening stories behind them.

With its selected iconic photographs from the ‘60s to the ’90s, this book will delight and entertain a wide range of readers – from those who recall those times and events to the current generation.