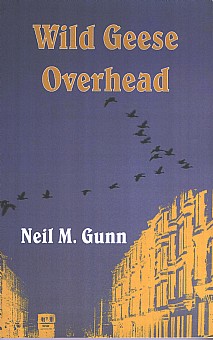 From this evocative title comes a powerful novel set in the city of Glasgow in 1939. This is indeed a bleak stage, and yet how does this title, with its implication of freedom and flight, meld with a depressed city at the outbreak of war? The main character, a journalist, finds that a glimpse of wild geese catalyses the development of his thinking on various levels - social, political and psychological. The contrast of urban and rural life, characteristically penetrating dialogue, remarkable insight, physical violence...all are included and take the reader on an absorbing and enlightening journey to the story's dénouement. Another outstanding novel from the creative pen of Gunn.

From the Foreword by Dairmid Gunn -
'Unlike most of Gunn's novels, Wild Geese Overhead is set in a city - the city of Glasgow. The title seems strange and inappropriate for a great commercial city bracing itself for the onset of another war. It suggests, however, another world, above and beyond the hustle and bustle of industrial Glasgow. The sight of a skein of geese flying northwards on a spring day presents itself as a sort of epiphany for the principal character, Will, a journalist, who chooses to live in the country and work in the city. He is given a momentary experience of transcendence, a moment of delight, that he will measure against urban violence and despair and the international threat of war. This clash between a vision and its inherent richness and the grim reality and pessimism of a city experiencing a dark moment in its history provides the essential theme of the book. ... The book has a strange relevance to the events of today. The battle against terrorism, the fear of recession and the decline in adherence to established religious beliefs, are symptoms, albeit in different guise, of an uneasiness with regard to world stability and the erosion of traditional values and beliefs. Freedom is always being sought, but not necessarily in the way Will sees it in Wild Geese Overhead.'